Ryan’s Daughter Brought a Bonanza to Kerry 50 Years Ago

Fifty years ago Hollywood came to Dingle when Oscar-winning director David Lean decided to use the Kerry countryside as the location for his multi-million dollar movie Ryan’s Daughter, injecting a huge amount of money into the local economy and placing Kerry very firmly on the world tourism map, writes Gerry Breen.

Fifty years ago, the filming of Ryan’s Daughter, starring Robert Mitchum and Sarah Miles, brought a bonanza to Dingle, Co. Kerry. The wild and beautiful scenery of the Dingle peninsula was the location for the David Lean film, which won two Academy Awards, and no expense was spared to bring the epic story to the silver screen.

The village of Kirrary, which was featured in the film, was constructed in the mountains behind Dun Chaoin, and the work meant there were many well-paid jobs at a time when local employment was low. 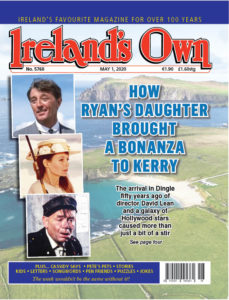 Incredible as it may seem now, the average industrial wage at the time was around £19 a week, and a good house could be bought for £5,000. With the arrival of the film stars and production crew, local workers were earning up to £50 a week.

The hundreds of movie personnel had to be fed and accommodated and this generated the kind of money that the people of Dingle had never seen before. It is no wonder there are still fond memories of the prosperity which accompanied the making of Ryan’s Daughter. It is estimated that the film generated £3 million in the Dingle economy over the two years of its production.

Even the local children benefited. The young students in Robert Mitchum’s classroom were paid £2 a day and £3 on Sunday. Farmers were paid £2 a load of stones drawn up the hill to Kirrary.

Incidentally, six months after the filming had concluded and the excitement had died down, someone discovered a brand-new Porsche in a lock-up garage – a birthday gift Robert Mitchum had forgotten to take home with him.
Originally, the film was intended to be about the Gustave Flaubert novel Madame Bovary, but when David Lean read the script, he suggested that he rework it into a different story and that’s how Ryan’s Daughter came about. It still contained elements of Madame Bovary.