When the first Halloween movie was released in 1978 it received critical acclaim. Today, 45 years on and eleven sequels later, the series is ranked No. 1 when compared to other horror film franchises, collectively taking in $773 million at the box office around the world. The franchise now comes to a close with Halloween Ends currently in cinemas.

Scan the TV listings at the end of the month and you are sure to find one of the movies listed. It happens every year.
The Halloween storyline is familiar, focusing as it does on Michael Myers, who was committed to a sanatorium as a child for the murder of his sister, Judith. Fifteen years later, he escapes as a masked killer to stalk and kill the people of the fictional town of Haddonfield, Illinois.

Michael’s killings occur on the holiday of Halloween, on which all of the films primarily take place. His main target is Jamie Lee Curtis’ character, sweet high-school student, Laurie Strode.
The series made a star of Jamie Lee Curtis. Her terrified look and ear-piercing shrieks proved so bone-chillingly convincing that a sequel, and more to follow, were inevitable. 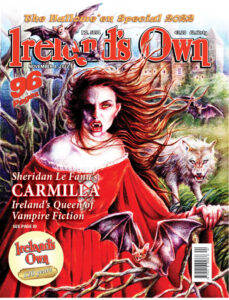 In 1980 alone, she released no fewer than three horror films, The Fog, Terror Train and Prom Night. But she will always be remembered for Halloween. She was in most of the sequels, including the final one now in cinemas.

The original Halloween movie was written and directed by John Carpenter and was said to have been inspired by Alfred Hitchcock’s classic Psycho in which Jamie Lee’s mother Janet Leigh starred.

Jamie Lee may have built her reputation in horror movies but she doesn’t like being scared in real life.
“I scare very easily,” she admits. “I know that might be a stupid thing to say, because in many ways I’ve made a good living out being scared. But in real life, I don’t like to be frightened. I find nothing charming in doing so. The only thing that’d keep me awake would be something scary like a horror movie and that’s not for me.

“I’ve always been this way. In our wedding vows, my husband and I promised we wouldn’t give each other surprise parties – a surprise party would likely send me straight to hospital. I guess you could call me a big scaredy cat.”
Jamie Lee has made other movies along the way, notably a comedy, A Fish Called Wanda co-starring John Cleese in 1988, True Lies, another comedy with Arnold Schwarzenegger in 1994 and Knives Out in 2019, a murder mystery in starring Daniel Craig, taking a break from his James Bond roles, and Christopher Plummer. But she’s still best known as Hollywood’s Scream Queen, despite her best efforts to make it appear otherwise. “It’s a name made up by the media,” she says. “They make up these titles and there’s nothing anybody can do about it.”