Screen Hero and his Hero Cousin

It’s September 1968, and the venue is the pleasant Curran household in Minard, Lispole, Co. Kerry. A tall, handsome visitor has arrived to address the occupants. 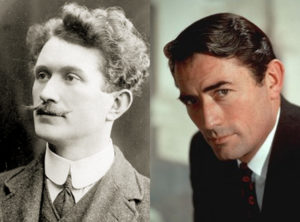 Apparently, the visitor’s paternal grandmother, Catherine Ashe, had emigrated to America in the 1880’s, married baker Sam Peck, settled in Rochester, New York, and had a son, Gregory Pearl Peck.
Sam died when Gregory was under a year old, so Catherine took him back to Kerry to be amongst his relatives. Six years later, she decided to take him back to the States again, where she found success as a saleslady in the ladies clothing business.

Son Gregory became a pharmacist, and in 1915, married Bernice May Ayres. On 5th April, 1916, in La Jolla, California, three weeks before the Easter Rising, their son Eldred Gregory was born.

Now, fifty-two years on, the same, delighted screen legend, Gregory Peck, whose parents had sadly separated when he was three years old, had finally met, and was mixing with, his Irish flesh and blood. But more was to follow.
The following day, after Mass in Dingle church, he and his wife Veronique examined the church births and marriage register, now seeking information on his purported biological connection with heroic patriot, Thomas Ashe.