From SBB Ina Shuí to Scaoil Amach an Bobailín to delivering the best in Irish sports coverage on Radio na Gaeltachta, Connacht man Seán Bán Breathnach has been a much-loved mainstay of Irish broadcasting for the past fifty years. He shared some career highlights with Kay Doyle.

It may be difficult to believe due to his youthful spirit and effervescent personality, but one of the West’s most instantly recognisable television presenters, Seán Bán Breathnach, has been electrifying our airwaves and lighting up our TV screens for just over fifty years.

Last April saw the famous Galwayman pass the half-century milestone, and he remains as enthusiastic about his job, and as passionate about our native language, as ever. 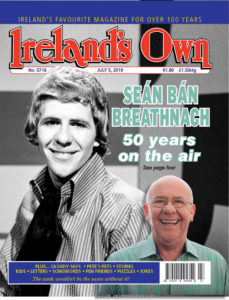 Seán was born in Inbhear, in Connemara, the youngest of four children. His father had lived in America during the Great Depression but found it difficult to settle, and returned home.

He took up various jobs to make ends meet working as a coast watchman, postman and farmer, “or as much as a farmer as it is possible to be in Connemara”, says his son with a laugh, as we catch up for a chat to mark his special broadcasting anniversary.

Seán left school at 14. In those days, as free education wasn’t introduced until 1966, it wasn’t unusual for children not to go on to secondary school, and more irregular still to proceed to college. At 16, he took the boat to London with his older brother, Pádraig, who was an engineer. Their eldest brother, Mairtín, had departed three years earlier and wrote home about the great jobs, and great money, that was going across the water.

Seán’s dad had inspired his interest in broadcasting. His father was very well read, and Seán himself was leafing through The Reader’s Digest by the age of nine.

As a family, they would listen to the BBC radio boxing broadcasts – in fact, broadcasts of all sports from soccer to rugby to horse racing. His dad was sports mad too, bringing them off to Railway Cup matches and instilling a love for sport that would last a lifetime.

Seán still remembers getting up in the middle of the night to listen to famous fights on the radio. One of the boys would be in charge of the radio, the other the cups of tae, and another stoked the fire. In particular, he recalls listening to Ingemar Johansson knocking out Floyd Patterson on the wireless back in June, 1959. He loved listening to Eamonn Andrews too, and he was another early inspiration for the would-be broadcaster.

And then there was Radio Luxembourg. Though it wasn’t the Irish Requests show on a Saturday night that caught his attention, Seán’s heart was in ‘the pops’. He wanted to hear Elvis. And Buddy Holly. And Sam Cooke.
In England, his uncle, Cole, lived thirteen miles north of London, in a place called Potter’s Bar. Cole’s first wife and children had been tragically killed when a bomb was dropped on their home during World War II. He remarried, a woman from Tubbercurry in Sligo, who was a singer and dancer. They had three daughters, and Seán lived with them. His uncle got him work on the buildings.

Seán was no stranger to hard work due to his grafting in the bogs back home. But it was when the weekend came, and Seán was brought to the local Youth Club, that his life behind the microphone took off.