A committed nationalist and socialist, he was the first Irish playwright of note to write about the Dublin working classes. His plays are particularly noted for the sympathetic treatment of female characters, writes PADDY RYAN

Playwright Seán O’Casey died in 1964. Aged eighty-four, he suffered ill-health for most of his life. However, his legacy of exuberant work included several memorable characters, such as Juno, Jockser and Fluther Good. Some of his plays, like those of fellow Dubliner, JM Synge, provoked extreme reactions. 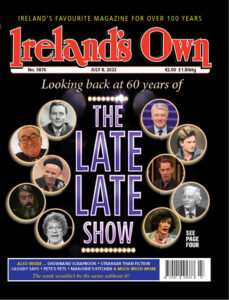 Born in Dublin’s north inner city, Seán O’Casey was only six when his father died. Left impoverished, his mother Susan was forced to regularly move house. The upside was the intimate knowledge the future playwright gleaned of life in the Dublin tenements that were among the worst in Europe.

Poor health saw O’Casey’s schooling constantly interrupted but he could read and write by the age of thirteen — a year before he started work as a railwayman. An active trade unionist, his involvement in the ‘Lock Out’ of 1913 saw him blackballed for a time.

In the backwash of WWl, the War of Independence and the Civil War, O’ Casey’s first play ‘The Shadow of a Gunman’ was staged by the Abbey, in 1923. For the first time Dublin’s poor or ‘the hidden Ireland’ took centre stage.
Better-off theatre goers could see the lives of their cleaners or labourers and how, despite the guns and mayhem, they managed to lighten the bleakness with generosity, humour and, above all, hope.