In 1941, as the Belfast Blitz unfolded, a remarkable story was taking place at Belfast Zoo. This is the story of Sheila the Elephant and her keeper, Denise. 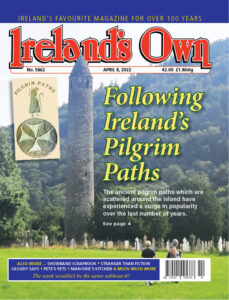 Some years ago, archivists at Belfast Zoo came across an unusual set of photographs. The grainy black and white pictures showed a pair of women with a young elephant. The location was not the zoo but the back yard of a typical Belfast house during the Second World War.

The elephant looked to be enjoying a drink from a tin bucket at the back door of the house.
Back in 2009, to mark Belfast Zoo’s 75th Birthday, the hunt began to discover the identity of this lady who was caring for this animal – the hunt for the ‘Elephant Angel’ was on.
As Belfast Zoo Manager Mark Challis, penned in 2009: “The care provided by our mystery lady is unique to zoo history and we would like to make contact with her family and properly document this gap in our past.”

The Belfast Blitz
In 1941, the threat of an aerial attack was becoming more likely.
April of that year saw the beginning of the Belfast Blitz. Belfast Zoo at Bellevue in North Belfast escaped serious damage during the raids. However, authorities feared the risk of animals escaping in the event of a further attack was cause for concern. To protect the public from the threat of wild animals fleeing through a broken perimeter, the Ministry of Public Security ordered the killing of 33 animals.

The unfortunate animals included a hyena, 6 wolves, a puma, a tiger, a black bear, 2 polar bears, a lynx, raccoons, and a vulture. Yet an animal who would come to no harm and survive the Second World War was Sheila, a baby Asian elephant.

Continue reading in this week’s ireland’s Own