Kieran Gillen and Jane Clucas tell the tragic story of their Aunt Sheila, a young Sligo nurse who died in an air raid over Chester in November 1940, during the Blitz.

November 1940, World War II has entered its second year. In England, the RAF have just won the Battle of Britain stopping any land invasion by the Germans for the time being. Adolf Hitler has instead turned his attention to the aerial bombing of British cities at night, the name of this bombing campaign came from the British press, they called it “Blitz” the German word for lighting. 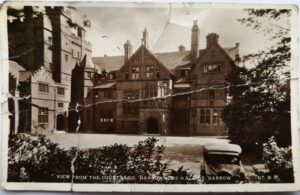 On the night of the 28th November, a young Irish nurse named Sheila Gillen was settling in to her staff quarters after finishing up her shift at Barrowmore Hall Sanatorium, on the outskirts of Chester, in the North West of England.
Barrowmore Hall and estate was built in the 1800s but by the Second World War was now being used as a hospital for ex-servicemen, many of whom were receiving treatment for Tuberculosis. Parts of the estate had been given over to the war effort and was being used to build aeroplane parts. 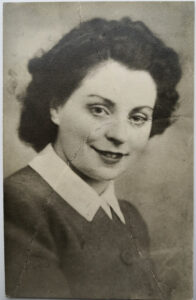 Sheila was from Co. Sligo and had travelled to England before the War to join her Aunt Kitty, to become a nurse like so many other young Irish woman had done before her. She would be joined later by her sister, Joan.
Her Aunt Kitty was a nurse in Southport, near Liverpool, where Sheila would stay until eventually being transferred, along with patients and staff, to Barrowmore Hall outside Chester.

Liverpool at the time was bracing itself for aerial attacks by the Luftwaffe; as the biggest port in the north-west of England, it was also a key route for the Atlantic convoys, making the city and its miles of docks along the Mersey a prime target.

It was believed that by transferring the patients to the countryside around Chester, they would be safer. Not long after Sheila first arrived at her new surroundings at Barrowmore Hall, she wrote a postcard to her sister, Joan, that had a photograph of the great old Victorian hall, on the back of the card. It read, “This is a photo of the hall, it’s quite a lovely old building, all kinds of quaint figures and writings and things on the staircase and hall.” The postcard (pictured right) showed a picture of Barrowmore Hall’s Victorian façade, on the black and white photo Sheila had marked with a pen the exact window of the room she was staying in.

It is believed that on the night of the 28th November, 1940, another young nurse, who was sharing a room with Sheila, found it difficult to get to sleep. Believing the bed might be the problem, Sheila offered up her bed so her colleague may get a better night’s sleep. Sheila now had the bed closer to the window. Tragically, this kind gesture towards her work colleague would later prove fatal.

According to reports at the time, an air-raid had begun in Chester at 7.30pm that evening, and continued to about 4.30am. Between 2 and 2.30am in the morning of the 29th November, two parachute landmines fell on the village near Barrowmore Hall. One landed on a local farm and the other landed just in front of the Hospital, blowing up the ground floor and collapsing the front of the building and the window and floor of the side of the bedroom where Sheila was asleep. Sheila’s earlier act of kindness in swapping beds saved the life of her colleague.

One local woman who lived nearby later recounted her memories of the incident, “After the explosion came the crashing of the masonry and broken glass as the Hospital collapsed, then the screams of the patients and staff.”
– Mrs Gwyneth Coffin