Sarah’s unused dancing shoes are symbolic of her marriage regrets…

The evenings were getting dark outside, the shadows lengthening in the kitchen, the ticking of the clock on the mantelpiece adding to Sarah’s sense of unexplainable agitation. She had cleaned the house from top to bottom, had scrubbed the kitchen floor with carbolic soap until her hands were raw and red, had prepared a nice stew, the one he liked, a nice bit of mutton with plenty of potatoes and carrots.

The dog had looked at her, padding about the house in her footsteps, her head cocked to one side as if trying to understand her restlessness, yawning every now and then in her wake, as if the whole process was a human trait not meant to be understood by her, but accepted as a human idiocy, and so she spent the hours in Sarah’s company, observing, but uncomprehending. 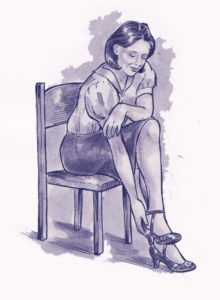 Finally, Sarah had sat, her hands clasped in front of her at the kitchen table, the piece of paper, folded and refolded, soiled from the meal’s preparations, remnants of peeled vegetables adhering to the edges. She read it over and over again, muttering the words under her breath.

“DANCING IN THE VILLAGE HALL THIS FRIDAY NIGHT, PLENTY OF FOXTROTS AND QUICKSTEPS, SLOW WALTZES AND OLD TIME WALTZES, WHATEVER TAKES YOUR FANCY – COME AND BRING THOSE DANCING SHOES!”

It had come through the letterbox three days ago, and she had seen Maura Davis going back out the front gate, looking over her shoulder at the house, pausing for a moment, then continuing on her way. Sarah knew she wouldn’t knock. She had no friends left in the village, because Seamus had seen to that.

He had made a show of her at the last dance at Christmas. He had ridiculed her dancing, her intrepid little steps, deft and nimble on the floor, addressing each beat of the music with impeccable precision, the men lining up to dance with her because she was so light on her feet and good fun too. Her smile was infectious, she always smiled when she danced, she forgot all her troubles the minute she heard the music start up, lost in another world where there was no husband to criticise her. He had danced one or two dances with her, but he had kept up a continuous flow of mocking banter about the other dancers, so that she felt uncomfortable and the enjoyment gone from her usual sense of elation as she waltzed around the floor.

Seamus Lovett was a hard man. A good working man, his large frame suited to his job at the sawmills, cutting timber planks to size, carting loads from one end of the timber yard to the other, his big muscular frame not afraid of hard work. People in the village had wondered why little Sarah Minihan had ever married him. A small, timid woman, with a lovely smile and the voice of an angel, because she sang in the local choir and everybody liked her for her quiet nature, never saying a bad word about anybody.
But Seamus was a different kettle of fish. He had domineered Sarah since their marriage. He had put a stop to her dancing, because she used to go every month to the parish hall for the church dance, and she had been in much demand as a dancing partner. Before their marriage he had gone to a few of them reluctantly, but afterwards he had refused to go, saying dancing was a ‘cissy’ occupation, and not worth the effort.

Gradually she had stopped going, had distanced herself from her friends in the village, and with her parents dead since before she had married Seamus, she felt isolated in the small cottage at the foot of the mountain overlooking the small village community.

The clock ticked away the seconds, and she knew he would be in soon for his tea. It was their anniversary on the Friday night, the night of the dance, and she hoped she could convince him to go with her, for the night that was in it, ten years married, surely it merited some recognition, a little dance for the two of them, sure what harm was in it?

She bent down and pulled out the box from beneath the bed. Her hands shook as she lifted the lid carefully, unfolding the tissue paper slowly, to reveal the shoes, dancing shoes, in all their glory, red velvet with a tiny crystal jewel glistening on the front of each, little narrow straps dotted with sequins. She had saved her housekeeping money for weeks for those shoes. She had put it away carefully in her jewellery box her mother had left her, hidden at the back of the wardrobe, so that he couldn’t find it.
She had gone into the city on the bus when she had enough saved, and almost ran to the shoe shop on the bridge where she had seen the shoes holding a place of supremacy in the window. They had not been displayed in the window and her heart had sank, but she hadn’t given up. The assistant had looked at the woman standing in front of her, small and an anxious look on her thin face. Sarah’s cheeks were flushed with concern and asked in a small voice – “The shoes, the red shoes, dancing shoes they were – are they gone, are they sold?” The assistant went to the back of the shop and brought out a box, taking the lid off, showing the contents to Sarah.

“Is it this pair you’re talking about – they’re a size 5 – the only size we have in them, I’m afraid – will you try them on?” Sarah had tried on the shoes, had walked about the carpeted floor as if she was floating on air, could just imagine herself twirling about the dance floor in a quickstep, wheeling and turning, her eyes closed….

“I’ll take them!” She had blurted out, watched the assistant placing them into the box, had handed over her precious savings, and left the shop feeling elated, and yet somehow apprehensive, thinking what Seamus would say….

“Whatever possessed you to spend my hard-earned money on such nonsense!” He had come home, had sat and eaten his meal in silence, and when Sarah had produced the shoes with trembling hands, he had stood up, pushing back his chair angrily, towering over her menacingly. Sarah backed away, the shoes falling to the floor, the dance notice crumpled in her hands behind her back.

“I thought it would be a nice thing for both of us, Seamus – on our anniversary – to go dancing together, you holding me in your arms, me loving you as I’ve always loved you, the two of us, together Seamus!” She was crying as she spoke, looking up into his angry face, not recognising the man in front of her any more.

She had made a mistake in marrying him, had been taken in by his courting ways, and his roguish smile, and the silly words of love that had never been uttered since then. He turned from her then, walking out into the night, whistling for the dog to follow him. The dog got up slowly from the mat in front of the fire, looking back at Sarah before following her master out the door for her evening walk through the woods by the river. Sarah stood in the empty kitchen.

She picked up the shoes, the straps hanging loosely from her fingers. She replaced them in the box, then went to the small, hollowed out compartment at the side of the fireplace. She placed the shoes in there, putting a small log of turf over the opening, drawing the whitewashed stone in front of it. Her dreams were shattered forever. She would never have a life, no more dancing, no more notions of beautiful dancing shoes sparkling with tiny diamante stones….

“I don’t care what you say, Alan – I’m keeping that fireplace – it’s so in keeping with this place, it would be a pity to replace it with a modern one!” The young couple stood looking at the smoke stained fireplace, the grate rusted, pieces of moss falling from the chimney, remnants of birds nesting there.

They had been lucky to get the place so cheap, every house they had seen had been far above their budget, but this place had suited them perfectly.

“We’re not far from the city – only a short commute – and the motorway is very handy, no bottlenecks, no traffic hold ups – sure, it’s made for us, Alan!” Kate had looked at him adoringly, putting her hand in his while he pulled her close to him.
They had taken out a mortgage on the place, and now were in the process of renovating it, modernising the kitchen, putting in a shower unit in the bathroom, central heating throughout. It had been a long time since anybody had lived there.

The owners had died, the villagers not giving much information, the estate agents non committal except to say that the couple who had lived there had kept very much to themselves, the woman disappearing, nobody knew where she had gone to, years later they had discovered she had died in a hostel in London, the man living out his life on his own until the postman had found him lying face down in a field, the dog sitting expectantly by his side, instinctively knowing his master was dead….

“Look at all this plaster – we’re going to have to scrape away the flaking bits, get down to the stone – .” Kate scraped at the plaster, her hands covered with white dust, until suddenly one of the bricks dislodged, and she stepped back quickly, watching it fall to the floor with a resounding thud. They both looked at the gaping hole left behind, and Alan tentatively put his hand inside, feeling something hard and crumbling his fingers grasping the battered shoe box as he pulled it towards them. Kate looked at it curiously as he opened the lid, the cardboard disintegrating in his hands, to reveal the shoes, the red velvet faded, the little diamond clasps still giving out a dull glow, as though their emergence into the light brought out a final surge of pride in their appearance.

“Oh Alan – aren’t they pretty – somebody must have loved them so much that they hid them in there – all those years ago….” Kate felt tears in her eyes. They belonged to a woman who obviously had the joy of living in her once. A woman who loved those shoes so much that she was reluctant to part with them, even if she had never worn them, they had been part of a dream…

“I wonder what happened Alan – these are such lovely dancing shoes…” Kate kicked off her ankle boots, stepping into the shoes gingerly. She tied the straps, and when she straightened up she felt a sudden urge to dance about the room, twirling and spinning until Alan caught her and joined in, both of them waltzing in time, the night shadows catching them in a kaleidoscope of colour, the red shoes tapping time in a frenzied motion of unrequited dreams, now finally satisfied.