“Have you anything exciting planned for Easter?” Aoife Bourke asked her friend, Joan O’Connor.

“Yes. Noel’s taking me away to a beautiful hotel on the shores of Carlingford Lough.”

“How lovely!” Aoife replied, thinking that this relationship must be getting serious. But there was just something about Noel Keenan that she didn’t like. 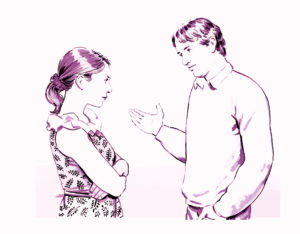 A few nights later, Joan and Noel were joining Aoife and her husband, David, for dinner. It was agreed that the couples would split the bill. Arriving at the restaurant, Noel immediately requested the wine and dinner menus. As he proceeded to say that he was looking forward to the lobster starter and venison for his main course, Aoife and David exchanged glances.

Two of the most expensive items on the menu, Aoife thought, already feeling piqued.
“If it’s alright with you folks, I’ll order the wine,” Noel said.
“Fine by me,” Joan answered.

As she studied the wine list, Aoife eyed Noel suspiciously while David enquired, “What would be your choice?”

“Mmm, I think the, ’72 Chardonnay would go down nicely with the lobster ravioli.” Aoife and David’s jaws dropped as they spied the hefty tariff on the list for the vintage wine. Then Noel smoothly explained. “I’ve done several wine tasting courses and if I say so myself, I do know a thing or two about my favourite type of grape.”

Aoife and David glanced at Joan who was beginning to look decidedly uncomfortable as the overbearing Noel continued. “I think a bottle of ’64 Bordeaux red would go down nicely with the venison.”

Aoife smiled wryly at the wine waiter, “We’ll have a bottle of the house white wine,” as David nodded in agreement.

“Oh, you guys, should live a little,” the arrogant Noel declared.
“We live according to our means,” David testily answered.

While Noel was whispering sweet nothings into Joan’s ear, Aoife hissed at David, “There’s no way we are splitting this bill, he’s going to have to pay for his expensive choices.”

“What are you having?” Noel looked at David and Aoife after they’d studied the dinner menu.
“I’ll have the soup to start, and the lemon chicken for main,” Aoife said.
“I’ll have the same,” David added as he made the modest choice.
“And you, darling?” he looked at Joan.
“I’ll have melon to start and the pasta in the mushroom sauce for the main course.”
“Will you be having the house wine as well?” Noel went on to ask.
“I’ll have a glass of the wine that you’re ordering,” Joan replied. This earned her a frown from him, until she clarified, “just a small glass.”

The self-centred Noel then visibly relaxed.

During the meal, the conversation was stilted. When it came to ordering desert, Noel declared; “I’m not keen on a sugar fix, I’ll just go with the cheese board and a large glass of special reserve port.”
David and Aoife sat livid while Joan stared into the middle distance.

When the meal was over, Aoife and David excused themselves from the table.

“I suppose we’ll have to split this enormous bill as we agreed that we’d share,” a furious David said to Aoife as they made their way to the restrooms.

“We’ll talk about this later,” Aoife muttered, striding off towards the ladies.

Returning to the table, Aoife noticed that the bill had arrived, strategically placed at her husband’s setting. It sat for an embarrassingly long time, until finally, David rose, picked up the tab and went off to pay it. He was closely followed by a mortified Joan, who offered to pay for their half of the bill.
“Ah no, you’re fine,” David said, brushing off Joan’s attempt to pay for their share, silently vowing, never again to be conned by the despicable Noel.

“Are you sure?” Joan’s face was scarlet as she made her way towards the ladies’ room.
Back at the table, a furious Aoife was glaring at Noel, but his eyes were drifting around the room. He was glancing appreciatively at the group of attractive young women at one of the other tables who appeared to be on a girls’ night out.

Joan was silent on the taxi journey home. When Noel was dropped off at his apartment, he made no attempt to pay the taxi fare.

Joan lay awake for a long time, pondering over her relationship with Noel. Lately, while he kept telling her that he was madly in love with her, she was beginning to have doubts.

When he’d first suggested going away for Easter, he’d led her to believe that it was his treat at the luxury hotel in Carlingford.

However, two weeks later, she’d been taken aback when he’d asked her for her credit card details to pay for her share of the stay in the five-star Mount Vernon Lodge. Seeing her startled expression, he went on to say; “Well, you must bear in mind there’s a hefty supplement for single rooms, unless…”
“No,” she stammered, “of course, I’ll pay for my share.”

A few nights later, Noel arrived at Joan’s house for supper. After they’d settled with the homemade curry, Noel cleared his throat and began; “I’m so sorry, darling, I’m afraid we’ll have to take a rain check on the plans for the break in Carlingford.”

“I’ve a business conference in Galway. Murphy’s law! It happens to be scheduled for the Easter weekend.”
“But what about Mount Vernon Lodge?” Joan asked, visibly upset. “Will we lose out on the money that we’ve paid for the weekend break?”
“Don’t worry your pretty head about that,” he reassured. “I’ve already phoned the hotel and we can take up the offer anytime.”

“I was so looking forward to the few days of luxury,” Joan replied. “Surely, your employers will understand that you have a life outside of banking.”
“Darling, the conference runs right through until Sunday evening. This could be a step up the ladder for me. Visiting executives are coming over from Copenhagen. They will be impressed with the few of us who are willing to forfeit our Easter plans to attend this important event.”
“I see.” Joan replied, as Noel topped up his third glass of wine. She noticed that once again, he’d arrived for dinner, empty handed. It wasn’t that he was short of money. He had a well-paid job as a financial consultant.

“I’m furious as well as being disappointed. I’m sure he could easily have told his bosses that he’d made other plans for Easter.” Joan told Aoife as they were having coffee in the Magnolia Tree Café the following day.

“Don’t worry,” Aoife, said. “Would you like to come along with us to our holiday home for the weekend? Grainne is coming as well.”

“Are you sure?” Joan brightened. She got along so well with Aoife’s sister, Grainne and a weekend by the sea held more appeal than spending Easter on her own.
“We’ll set off on the Wednesday and we’ll be back on Sunday evening.” Aoife told her, relieved, that perhaps finally, Joan was seeing through her dreadful boyfriend.

On the evening before the trip to her friends’ holiday home, Noel dropped by unexpectedly.
“I couldn’t let you go off for the weekend without giving you an Easter present,” he said as he withdrew a little square package from his pocket.

A wave of guilt stole over Joan as she spotted the small brightly-wrapped gift box. This looks like earrings, she thought. Opening the gift her face fell. Inside was a small crème Easter Egg.
Putting his arms around her, Noel spoofed, “You’ve such a fabulous figure, I know you wouldn’t want to pile on the pounds eating one of those awful calorie-laden eggs.”

“Thank you,” a gobsmacked Joan mumbled, as she thought of the beautiful, hand-made chocolate egg that David bought for Aoife every Easter.

The following day, before they set off on for the trip to Rathview for the weekend, Joan set the video to record a film that she’d been keen to view which was being aired on Easter Saturday.

On Friday morning, Aoife, Grainne and Joan set off for a long walk on the beach.
Turning to Joan, Aoife asked, “Have you heard from Noel?”
“I’ve had a few text messages, he says the conference is pretty hectic.”
“Mmm,” Aoife was thoughtful. She wondered why he didn’t call Joan in the evenings when the meetings were over.
Joan and her friends spent the weekend relaxing. The sun shone and they made the most of the scenic drives and the long walks on the beach. In the evenings, they dined in little seafood restaurants in the small coastal town, enjoying the fish, fresh off the boats.

As Joan drove back towards her home, early on Sunday evening, she was amazed by how little she’d missed her boyfriend.

Arriving back at her house, she picked up the mail from her doormat. Shortly after, she made a cup of coffee and sat down at the kitchen table to open her letters. As she opened the first envelope she froze. Impossible. There must be some explanation, I’ll ring them first thing in the morning, she thought, making her way into the sitting room to watch the film. Turning on the television she pressed the play button. The evening news was on before the film. She began to fast forward, then her heart pounded. She rewound to watch the end of the news.

A while later, the doorbell rang. “Darling, I’ve missed you so much,” Noel began as he attempted to take her in his arms.

“What’s wrong, my sweet?” a look of alarm crossed his handsome features.
“Come inside,” a stony-faced Joan, commanded.
“Honey, whatever’s wrong? Let’s talk about it.”
“Oh yes, we’ll talk about it alright,” Joan said as she flicked on the television.
“Can you explain this?” she thundered.

The television reporter who was standing beside a flower a stall on Dublin’s Moore Street, began, ‘The recession seems to be well and truly over as flowers are being snapped up for loved ones this Easter.’
“Try telling me, that this is not you?” Joan fumed as she kept rewinding the clip of Noel, buying the cheapest bunch of flowers on the stall.
“Nonsense darling, everyone has a double,” Noel tried to stay composed.
“Oh really?” Joan spat. “How do you explain this?” she flung her credit card bill at him.

“Mistakes can be made,” he grappled as he thought about how Joan had told him that she rarely studied her credit card bill – it was paid directly out of her current account.
“Just who do you think you’re fooling? €2,000 was deducted from my credit card to pay for your stay at the Westpoint Hotel in Dublin. When I phoned a short time ago to query it, I informed the hotel manager that my credit card had been fraudulently used. He confirmed that a Mr Noel Keenan and his partner stayed at the hotel for three nights. He also told me that Mr Keenan insisted on paying for the accommodation, meals and wine upfront a few weeks ago. I told the manager that I would be contacting the police, if this money is not refunded.”

A white-faced Noel, pleaded. “Please don’t go to the police, I’ll go into my online banking, straight away.”
“You’d better do so. I also phoned the hotel in Carlingford and they have no record of you making any booking for the Easter weekend.”
“I can explain everything,” Noel began, his arrogance fading.
“Save it for your employers. Now get out of my house and out of my life. If this money is not refunded immediately, I will be going to the police.
“But look on the bright side, your bosses may not fire you, they may show some compassion, and keep you on as porter.”