The office girls are excited about their Valentine gifts, but Betsie is not expecting anything exciting from her man…

Betsie braced herself as she stepped into the office on Valentine’s Day. She glanced round to check; it hadn’t started yet. Good, she’d be able to fortify herself with coffee first. That might help a bit. Looking really busy was her main line of defence though. Betsie kept her gaze on the screen and her hands busy on the keyboard to discourage anyone from asking her if Tim had brought her breakfast in bed or made any other such silly gesture.

“No,” she’d said last year, just keeping from snapping. “I only have a piece of toast in the morning anyway and there’s nothing romantic about crumbs in the bed.”
That was true. She didn’t want Tim to bring her breakfast in bed. Besides he didn’t have to resort to gimmicks to show he loved her. She knew. He’d told her several times.

The onslaught began just before ten. A huge bunch of roses arrived for one of the women. The same woman whose husband Betsie had seen in a quiet country pub with a blonde. Betsie thought she ought to give the woman a hint. Probably better not do it today though.

Betsie noticed at the glowing look on the woman’s face as she read the cheesy note attached to her bouquet. Maybe she should make enquiries before saying anything. The husband might have to entertain clients as part of his job, or have a sister he socialised with. Betsie shook her head, she wasn’t going soft was she?

More gifts arrived during the day. Some were awful gimmicks. Chocolates costing twice the regular price because they were in a heart shaped box, ghastly, gaudy padded cards and tiny teddy bears which were supposed to be cute but usually weren’t. Flowers, even over-priced, imported hot house ones seemed better than that. It seemed silly for them to be sent to the office though.

By the time they’d sat crammed together in the bathroom sink all day and the wives or girlfriends struggled home with them, they’d be getting tatty. It was as though everyone had to prove something to the world, not show their love to one special person.

There was one case where Betsie understood the gift not being given in person. One girl only saw her middle-aged boyfriend mid-week. She’d never been to his home or met any friends or family. He’d made an excuse not to see her over Christmas too. Betsie was worried he was married and had dropped a few hints to the girl. She’d do it again; but not today.

The lad who delivered the post to all the offices came in just then.
She’d given him a hint too. Had he acted on it? Betsie watched.

Yes! The pile of mail he added to young Suzy’s in-tray contained an oversized envelope in much the same red shade as the lad’s face had gone.

As he approached Betsie’s desk he gave her a sheepish grin and a thumbs up.
“Oh look!” Suzy squealed a few minutes later.
Several of the women clustered round to look.
“Who’s it from, Suzy?” They wanted to know.
“I’ve no idea.”
“Of course you have,” Betsie said.
“Really I haven’t. I don’t have a boyfriend.”
“Look at the envelope.”
“It just says Suzy. That’s odd. How did it get here with no stamp?”
“You saw it arrive, didn’t you?”
“Yes. But…oh! Do you think…?”

It was generally agreed the messenger must have been responsible for both delivering and sending it. It wasn’t any surprise to anyone when, later in the day, Suzy decided she needed to pop down to the postroom.
The real irritations didn’t kick in until lunchtime. 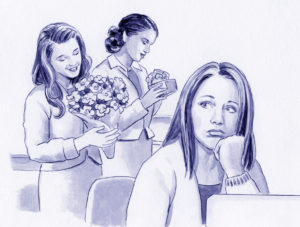 By then everyone who was likely to receive such a thing had their flowers, cards or chocolates. Three women had been taken out to lunch and another had left to meet her fiancé as they were off to Paris for a couple of days.

“So did Tim get you anything?” she was asked.
“Yes, he gave me flowers.”
“Aaaw, red roses?”
“No. I prefer seasonal flowers.”
“Tulips? I love tulips.”
“Snowdrops actually. I love snowdrops.”

When they’d first started dating in the autumn he’d given her chrysanthemums and she’d told him her preference for seasonal flowers. She’d been delighted when he’d given her a pot of living snowdrops on Valentine’s Day. She’d planted it in the window box of her bedsit.

Each year he gave her more and by the time they started living together three years ago, she’d been able to plant out a nice big patch of them. They were still adding to it.
Conversation then turned to plans for the evening.

Most of the women seemed to have arrangements for a meal out. Tim and Betsie didn’t go to a restaurant on Valentine’s Day. Everywhere was always so crowded that the atmosphere was hardly intimate and romantic.

One woman had plans Betsie approved of. “We’re going to an open evening at the local observatory. My hubby noticed I never miss anything with Brian Cox in, so thought it was a good idea.”

“You didn’t tell him it was the presenter not the physics you were interested in then?”
She grinned. “It didn’t seem tactful. Besides it might be interesting and looking at the stars together is rather romantic, don’t you think?”

Betsie and some others agreed.

“And we’ll grab a takeaway and bottle of wine on the way home.”

That sounded rather nice to Betsy, but it was clear one or two others felt that unless the gesture was expensive, it didn’t really count no matter how much thought went into it.

Betsie was indeed going to cook, but as they were having a ready made pizza it wasn’t going to be much of a hardship.

After they’d decided the fourteenth of February wasn’t the best date for a meal out, they’d decided they’d eat in. They took it in turns to either chose the starter and main course, or desert and wine. That way they both got a surprise and a treat.
Often the wine didn’t match the meal, as with the full-bodied red, Betsie had bought the previously year. It wasn’t the obvious choice with the king prawn stir fry Tim had made, but neither of them worried about that kind of thing.

“I insist on being taken somewhere luxurious for any special occasions and being given a nice piece of jewellery,” Betsie was told. “You really should get that man of yours trained.”

She felt like replying, “And you should treat yours better so he doesn’t sneak out to meet blondes,” but instead she asked, “And what do you do for him?”
“Me? Do? I don’t follow.”
“Isn’t it Valentine’s day for him too?”

Betsie and Tim’s relationship was a true partnership. Special occasions were a reason to celebrate together, not for one to spend money on the other. Any spare cash they had went towards paying a bit more off the mortgage, not on a silly bit of jewellery. Not that all jewellery was silly; there was one piece Betsie would very much like to have. Still, she didn’t need it. She knew Tim loved her and hadn’t they proved their commitment to each other by buying the house?

As Betsie left work that evening, she saw something that she felt symbolised the true meaning of Valentine’s Day. The postboy was stood outside looking a little vulnerable. Betsie smiled at him and his face seemed to explode into a grin. Not at her, she didn’t think he’d even noticed her. He was smiling at Suzy skipping down the steps to meet him. They exchanged a few words and turned to walk away together. As Betsie watched them go, Suzy reached out to take hold of the boy’s hand. She mentally wished them well, then went home to her beloved Tim.

Before she unlocked the front door she bent down to sniff the pot of snowdrops in the porch. They had a sweet, subtle fragrance. Perfect. She had a quick shower, put on her slinkiest dress and went down to lay the table.

Tim came home, kissed her, then put a bag in the fridge. “Don’t look yet,” he said then went to get changed himself.

She had the starter prepared, fresh basil picked, and oven on by the time her returned.

“Something smells good, what are we having?”
“Inspired by the prawns you cooked last year, we’re having some for a starter. Just a few sizzled in garlic butter. Then the pizza.”
“Looks good. Is that black olives and mascarpone I can see?”
“Of course!”
“You know me so well, love.”
“Let’s see if you know me as well… Something chocolatey for dessert? Or with fruit, or cream.” She laughed. “Actually as long as you got some kind of dessert you can’t have gone wrong, can you?”
“That’s what I thought. We’ve got chocolate cheesecake…and strawberries and cream.”
“Mmm, double points!” She kissed him. “We’d better get started if we’re going to get through all that.”

“Why don’t we have a drink first?”
“Yes, OK. Is everything all right, love?”
“Yes.” He didn’t sound positive. “I really should have got red to go with the pizza.”
“White will go with the prawns though,” she pointed out.
“True. I’ll get the glasses.”

Betsie opened the fridge to look for the wine. It wasn’t ordinary white wine, but sparkling. Lovely. Oh, champagne! That’d be something to tell them at work, especially as it was vintage stuff. She hoped he hadn’t spent too much. Any champagne was expensive and as this was done up with a fancy silver ribbon it was surely no exception.

What was that on the ribbon? It looked like a ring. She was studying it as Tim placed the glasses on the table. Yes, it looked just like a diamond ring.

Another silly gimmick. Probably Tim hadn’t seen that, or he’d not have bought it. What an irresponsible thing to decorate a bottle with, especially on Valentine’s Day.
Some women given that would get entirely the wrong idea.

Betsie was just wondering whether to say anything to Tim, or just remove the ribbon and keep quiet when she noticed he was crouched down.

He’d seemed quiet since he’d come home. What a shame if he had indigestion. They could keep the food until tomorrow, but it wouldn’t be quite the same.

Tim reached for her hand. She’d started to help him up when the truth dawned on her. He wasn’t crouched in pain, but on one knee looking nervous.
“Betsie, will you marry me?”
“Yes. Oh definitely, yes!”
He stood up and pulled her into his arms. Some time later he slipped the ring on her finger. It was too big.
“I thought it might be,” Tim said. “I wanted you to be able to put it on for tonight though.
“The shop gave me a thing to check your size and they’ll either make this fit or swap it for one which does.”
“I want it to be this one.”
“Good. Me too. It will take a few weeks to have it altered though.”
“No problem.”

She’d have nothing to show them at work in the morning. Nothing that is except the huge grin on her face, bounce in her step and sparkle in her eyes.
Those who didn’t think that was what was most important weren’t worth impressing anyway.