Walking in the woods alongside Vartry reservoir in county Wicklow on a beautiful summer day, I think our Japanese friends may be onto something when they speak of shinrin-yoku, literally ‘forest bathing’, i.e., bathing in the forest atmosphere, or taking in the forest through our senses. The reservoir and its woods have some lovely easy-to-walk trails and shinrin-yoku is simply yours to experience in Vartry by being immersed in nature, connecting through the senses of sight, hearing, taste, smell and touch.

Woods surround the manmade lakes in Vartry and visually they are a very scenic body of water, especially when you are looking across at the volcano like peak of the Sugarloaf, my favourite Wicklow mountain. 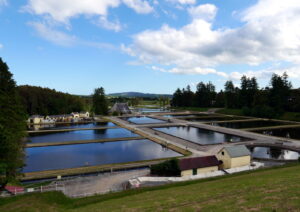 The reservoir was the brainchild of Sir John Gray (1816-1875), more anon, with much of the ground and building works of this huge development being carried out and completed by men using only picks, shovels, horses and carts.
Development of the Vartry reservoir was greatly driven by Dublin’s cholera epidemic of 1832 where more than 5,200 people died. Basic sanitation and clean water were scarce at that time, especially for the poor, and the overcrowded living conditions led to the rapid spread of disease and infection.

The death rate from cholera was extremely high at the time due to a lack of medical knowledge of the disease and how it spread. Some of the best-known graveyards in Ireland today have little-known corners that were used as mass graves for the victims of cholera.

As Dublin’s population expanded the need for additional fresh water supplies greatly increased.
In October 1860, a Royal Commission, being mindful of previous cholera outbreaks, urgently recommended that a new fresh water supply should be provided from the Vartry River in Wicklow. The project had an estimated cost of £500,000, around €71 million in today’s value.

The canal companies provided the now inadequate water supply to Dublin and facing financial ruin, they did their utmost to prevent the Varty project and engaged in many underhand ploys’ to prevent it.

The Vartry scheme was completed due to the efforts of Sir John Gray, an Irish physician, surgeon, journalist and politician. Gray was born in Mount Street, Claremorris, Co. Mayo in 1816 and educated at Trinity College and went on to Glasgow University in 1839. Growing up, he became interested in politics and the needs of communities.
Despite being from the Protestant ruling class, Gray became the political editor of the nationalist newspaper The Freeman’s Journal and was co-owner from 1841. In 1850 he became sole proprietor of The Freeman’s Journal, and by reducing its price he considerably increased its readership.