Sixty Years of the Irish in British Sitcoms

As the BBC celebrates sixty years since its first sitcom Hancock’s Half Hour was aired, Seán Hall takes a look at some of the Irish actors that 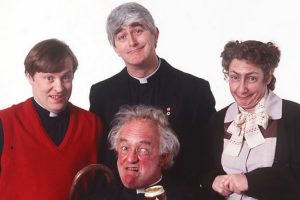 have left a laughing impression on British TV audiences

The British sitcom first began, according to the BBC and many televisual aficionados, in the year 1956, with the release of Hancock’s Half Hour, a series which ran for five years until 1961. It was written by Ray Galton and Alan Simpson, who would go on to begin their most beloved series, Steptoe and Son, in 1962. But how has the sitcom in the history of British television impacted on Ireland and the careers of many of our acting talents known across both sides of the Irish Sea?

c
Whilst predated by other popular series such as The Army Game, Steptoe and Son was the true beginning of the sitcom in British life, depicting a father and son, two rag and bone men, who despise each other and yet each is heavily dependent on the other in their own way. The programme is an excellent parody of family relations in everyday life, insofar as the ambitious son is now reduced to following in his father’s footsteps as well as taking care of him in his old age. Very few avid viewers of the show will forget the phrase Harry H. Corbett oft repeated to Wilfrid Brambell on screen, of “You dirty old man!”

Steptoe and Son’s success created a firm grounding for the sitcom and proved its popularity to the extent that between 1970 and 1975, when the show was revived after a four year hiatus, two feature films and two Christmas Specials were produced due to public demand.

It is not widely known that Wilfrid Brambell was actually from a Dublin family, and began his acting career upon its famed stages of the Gate and the Abbey.

Born in 1912, his father, Henry Brambell, worked as a cashier in the Guinness Brewery and his mother, Edith Marks, was once an opera singer. He first got work as a child entertaining wounded Irish soldiers from the First World War.
He made a small mark in his early adult years, acting in the Abbey Theatre then moving to Swansea to continue his theatre work in Britain. Before joining the sitcom hall of fame, Brambell was largely a character actor, featuring famously in a BBC Radio 2 depiction of Ebenezer Scrooge in 1956.

c
Brambell passed away due to complications concerning cancer in 1985. His iconic double act alongside Harry H. Corbett was a hallmark for future success in the comedy industry for the next several decades.
Steptoe and Son’s depiction of the family unit grafting for success whilst experiencing circumstances with hilarious consequences, would inspire directly Only Fools and Horses, in its depiction of the Trotter brothers in similar circumstances to both of the Steptoes.

Irish actors were thin on the ground in the 1980s in British sitcoms but David Kelly did feature in the ITV sitcom, Robin’s Nest, where he portrayed Albert Riddle, an Irishman with one arm who worked in the kitchens. Despite his prominent appearance in this series, Kelly’s cameo in the second episode of Fawlty Towers, ‘The Builders’, is perhaps more notorious for his stereotypical depiction of an alcoholic, Irish cowboy builder named O’Reilly, whose shoddy workmanship leads to the entire restaurant and kitchen being separated from the rest of the hotel.

British journalist David Stubbs, has noted this episode as the weakest of all twelve Fawlty Towers episodes, for its reliance on sexist and racialist stereotypes, with Manuel the Spanish waiter, a regular on the series played by Andrew Sachs, appearing as more of a comical dimwit lost in translation than as per usual.

It is regrettable that this is the best-remembered Irish character from this period and notable that Brambell was successful playing a Cockney character in his sitcom, rather than an Irishman.

Richard O’Sullivan, who starred as Robin Trypp in Robin’s Nest, alongside Kelly, was a Londoner with Irish parents.
O’Sullivan spent a holiday in Cork as a child, from which he picked up an exaggerated Irish accent but there was no trace of this left when he appeared on screen. Indeed it would be the 1990s and a new generation of Irish writers and actors that would break through into the British sitcom scene.

In 1995, Channel 4 released Father Ted, the most famous and acclaimed Irish comedy, produced by a British television station, with Dermot Morgan, Ardal O’Hanlon, Frank Kelly and Pauline McLynn playing major sitcom roles.
Father Ted allowed for a progressive development for the Irish in sitcoms, as no longer did they play stereotypical supporting characters or ones of English nationality.

The programmes’ creator, Graham Linehan, would go on to create two more sitcoms which would effectively use Irish actors; Dylan Moran in Black Books and Chris O’Dowd in The IT Crowd. Moran’s character of Bernard Black, can appear stereotypically Irish in his large consumptions of alcohol, but his contrary and feckless nature reflect a mere cynical human being and his being Irish does not pronounce the humorous nature of his character.
In The IT Crowd, O’Dowd played a double act with Richard Ayoade, and whilst his character of Roy appeared feckless in his nature, his exploits were no different to those of Ayoade as Moss, preventing a stereotype from emerging within the character.

O’Dowd himself would go on to create the successful Moone Boy for Sky1, based on his own Irish childhood, which featured a host of Irish actors, just as Father Ted had before it, including Deirdre O’Kane and Peter McDonald.
This was a sign of change for the 21st century, in relation to how the sitcom would use the Irish as both characters and actors, by portraying fleshed out characters of Irish nationality rather than stereotypes or English figures, as the likes of Brambell and Kelly were forced to do in their day.

No Irish actor in comedy seems to have replicated the success of Wilfrid Brambell in Steptoe and Son, with many remembered British sitcoms featuring, for the large part, no Irish actors or characters, particularly with the rise of comedians, such as Rik Mayall and Rowan Atkinson, creating and starring in their own work in the 1980s.