Spitfire Paddy – the Irish flying ace who terrorised the Nazis

On the occasion of the 100th anniversary of the birth of Wing Commander Brendan ‘Paddy’ Finucane, Con McGrath recounts the story of the charismatic Dubliner who won the hearts and minds of a beleaguered world that was fighting for freedom.

Brendan Finucane, better known as ‘Spitfire Paddy’, was one of the most celebrated and well known men to serve with the Royal Air Force during Britain’s ‘Darkest Hours’ of World War Two. He was also an Irishman.
As a fighter pilot Finucane was credited with 28 air victories, as well as five probably destroyed, six shared destroyed, one shared probable victory and eight damaged.

Spitfire Paddy’s fame as a fearsome pilot spread not just across Britain and the Commonwealth, but also across the Atlantic. The New York Journal hailed Finucane as a “fighting Gael”, and the Chicago Herald carried a front-page picture of him under the headline “Flying Shamrock terror of the Nazis.” 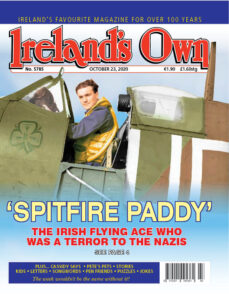 During the war he was rapidly promoted and, at just 21 years of age, the Dubliner was made a Wing Commander. To this day, he is the youngest ever to hold that rank.

Finucane was always proud of his Irish blood and would also, during the war, have many occasions to be concerned about it, especially when he saw it pouring out of him after he was ‘shot up’: “The cockpit was awash with blood.” he said after just such an occasion: “It was not until I was feeling a bit sick and dizzy did it dawn on me that it was my blood!”

“It was good Dublin blood which, I thought, should not be wasted. How I even managed to land without a crack-up will never be known. The luck of the Irish triumphed that day.”

Florence was English, originally from Leicester. She had travelled across Canada at a young age, and moved to Dublin to seek her own adventure. In 1919, she met Thomas Finucane, who had been involved in the Irish Rebellion of 1916.

Thomas had been taught mathematics at college by Éamon de Valera. As a member of the Irish Volunteers, he served under de Valera’s command in Boland’s Mill. Thomas’ own father (Brendan’s grandfather) had served in the King’s Own Scottish Borderers on the North-West Frontier Province in British India.