Spreading the News – the Changing Face of Newspapers

The national and provincial press has been a significant means of communication in Ireland for many, many years and, despite predictions to the contrary, that situation is unlikely to change in the foreseeable future, writes Gerry Breen.

About ten years ago people started saying that newspapers were dead because the internet was taking over and everyone would get their information on line. However, print is fighting back. It has been around for more than three hundred and fifty years and has learned to deal with many threats to its existence. 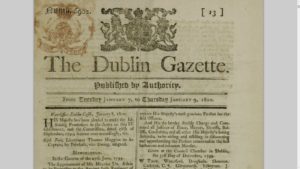 The printed word now has to compete with the internet, social media and television, but still for many people life would be almost inconceivable without a newspaper.

Although there is some debate about when the first newspaper was published, it is generally agreed that this occurred in Germany in the year 1605. America’s first newspaper, The Boston News-Letter, began publication on 24th April, 1704.

The two-page first edition of the first ever printed British newspaper, The Oxford Gazette, was published on 7th November, 1665. At that time London was in the grip of the Bubonic plague. The first issue is mentioned by Samuel Pepys in his famous diary.
The Times, which was founded in 1788, is the oldest newspaper in England. It was nicknamed ‘The Thunderer’ in 1831 from an article on the Reform Bill urging people to ‘thunder for reform’.

The oldest newspaper in the National Library of Ireland goes under the attention-grabbing title – An Account of Chief Occurrences in Ireland, and it was published in 1660 by Sir Charles Coote. However, it only lasted for a few issues. Apparently, there weren’t all that many chief occurrences in Ireland at the time.

A paper called The News-Letter was published in Dublin in 1685, and it appeared twice a week for seven months. This was closer to the modern concept of newspaper publication. Dublin, as the second city of the British Empire, was naturally to the forefront in publishing newspapers. It was in Dublin that Cornelius Carter began publication of The Flying Post in 1699. This paper ran for twenty-five years and it really marked the beginning of the era of continuous newspaper publication.

In the eighteenth century, newspapers were generally issued twice a week. In 1773 Francis Joy published the first issue of the Belfast News-Letter, which eventually became the longest-running provincial newspaper in English in the world.

Long before any of these publications, the Roman Acta Diurna (The Daily Events) started around 59 B.C. This was a daily handwritten news report posted in a specified public place under the orders of Emperor Julius Caesar. Around A.D. 700 the Chinese developed a paper called the Dibao, which was produced with hand-carved wooden blocks.

Another forerunner of the modern newspaper was Notizie Scritte (written notices) published in Venice from 1556. The price of Notizie Scritte was one Venetian coin called a gazetta, hence the word gazette later came to mean a newspaper.

As you might expect, Queen Victoria was not amused by newspapers. She said that none of the worst French novels from which careful parents try to protect their children can be as bad as what is daily brought and laid upon the breakfast table of every educated family in England, and its effect must be most pernicious to the public morals of the country. God only knows what she would have said if she had been receiving The News of the World instead of the Daily Telegraph.

Continue reading in this week’s Ireland’s Own (issue 5587)