Squaring of the Green

An embarrassment of acting and directorial talent has meant that Ireland has boxed well above its weight when it comes to TV and cinematic output, writes Tom McParland.

All nations are obsessive. The British crow about their stiff upper lip and their victory in the 1966 World Cup in the same breath. The Americans, like some Northern Ireland loyalists, are so unconfident about their identity they have flags coming out of their ears.

We Irish – reactionary penitent pilgrims – feel the need to inflict ourselves with dual language signposts, the myth that we all speak Gaelic and that Micheál Mac Liammóir, Bing Crosby and Victor McLaglen were, or at least should’ve been, Irishmen. 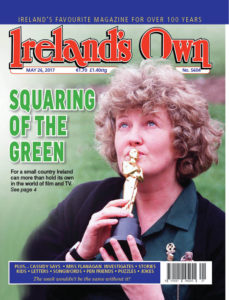 Superficially the reason for national obsession is guilt: Americans (Red Indian), British (Ireland and dozens of other countries) and Ireland (historical defensiveness). We feel about Ireland the way we feel about ourselves returning from a package holiday. We didn’t spend €7000+ getting DVT, sunstroke, and bringing home marble Buddhas-on-a-rope or kangaroo back scratchers to be laughed at! But the real reason we can’t get enough about Ireland is an everyday warts-and-all love of our country.

Hollywood has profitably played for years on this naivety. Remember 1944’s Going My Way? The one where operatic giantess Risë Stevens is supposed to have been the ex-girlfriend of elfin Father Bing O’Malley when he was humble Chuck. The attraction was mutual, Risë’s enthusiasm for sophisticated Swinging on a Star and Bing’s raving about hoe-down Mussorgsky’s Khovanschina.

Yet it’s as plain as the dieresis on the e of Risë that she’s only there to cluck Ave Maria. And what about that old fox, Father Barry Fitzgerald being lulled to sleep dreaming of Ireland and his old Mum whilst Father Bing crooned Too-Ra-Loo-Ra-Loo-Ral? Then at the end when Barry’s 90-year old mute mother is wheeled in like an unsteady Madonna in a village procession, it really brings a lump to the gloat.
Bing was at it again in 1945’s Bells of Saint Mary’s, a much better effort thanks to the pugilistic presence of Sister Ingrid Bergman and Bing’s acerbic housekeeper Una O’Connor.

Just when we thought Sister Ingrid was laid up somewhere as a praying tubercular saint, we were shocked to learn that, far from a potential mother superior, Ingrid became a superior mother with three husbands and four kids. But regardless, every time Bells turns up on TV, Ingrid regains her saintly dignity for two hours and we, the trusting unquestioning Catholicism that made the making of Bells tenable.

Continue reading in this week’s Ireland’s Own (issue 5604)