St Brigid of Ireland – Queen of the Gael

Saint Brigid of Kildare is one of Ireland’s patron saints, along with Patrick and Columba. Her feast day is 1 February, writes Gemma Grant

One of the most immensely popular of the Irish saints is strangely enough the one who is shrouded, not in recorded historical records, but in myth and legend.

Brigid, we are told, comes into Irish accounts in 450 A.D. Her mother, Broicsech, was brought to Ireland as a slave. One source claims Broicsech, a Christian, was brought from Portugal by Irish sea raiders. The sea crossing for the captives was one of danger and those who survived, knew little of the fate that awaited them in a strange new land on the western outskirts of Europe.

Brigid’s mother was sold to Dubhthach, a young pagan chieftain of Leinster. Although Dubhthach was already married, he went on to father a child to Broicsech and he called his new daughter, Brigid, after a pagan goddess.

The early story of Brigid is associated with Faughart in Co. Louth, although her prowess and reputation spreads throughout the island of Ireland. While growing up the daughter of a slave mother, Brigid, seems to have displayed few if any subservient qualities. 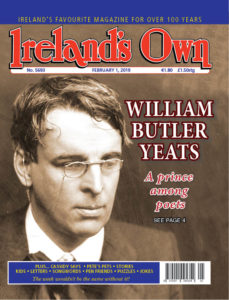 By all accounts she displayed a strong, independent spirit. As a free woman and a valued member of her father’s clan, Brigid resisted all attempts by her father to have her marry a suitor of equal standing, in the hope he would consolidate power between his kingdom and a neighbouring one.

Much to his chagrin, she informed her father that she wanted to enter religious life. She was said to have possessed great beauty and that placed her in high demand as a wife. One account tells us that to discourage suitors, Brigid prayed to God to take away her beauty.

Her prayers were answered, when out walking one night, her face was scarred. However, the disfiguring lasted only until she entered religious life. When she made her religious vows to St. Macaille, Bishop of Croghan, Co. Offaly the scarring vanished.

It is believed that Brigid was perhaps fifteen or sixteen when she became a religious sister. An early version of Mother Teresa, she travelled the land visiting various settlements helping the sick, the poor and the outcasts. True to the nature of Ireland, she prayed the animals would survive the harsh winters. In so doing, it would ensure that the settlements would have food to eat and milk to drink.