St. Stephen’s Green, Dublin, takes its name from the church of St. Stephen and its attached leper hospital, which were located nearby. In 1664, Dublin Corporation began to lay out the Green in what would be the earliest and largest of the city’s residential squares. The area that now includes the Green was then a sixty-acre plot of common marshy grazing land and was home to the snipe bird. 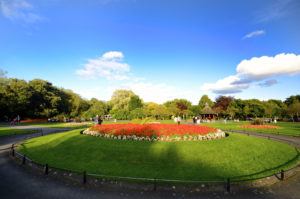 During layout phase, a central area was marked out to define the park boundary, with the surrounding area divided into 96 freehold plots. In 1664, the lease on these plots cost between one and a half a penny per square foot. Owners also had to contribute to the cost of building the park boundary wall and had to plant six sycamore trees in proximity to it.

The wall around the Green was erected in 1669, with a channel dug on the inside to assist in draining the land.

Most public hangings and executions in Dublin took place at the Green until the 1770s. Many of those executed were transported via horse and cart from the nearby Newgate Gaol.