An actress who hadn’t much of a singing voice, and a husband who was an interfering pain in the neck; an author who didn’t want this actress in the film version of his 1958 novella, anyway; a composer whose early musical training was on flute and piccolo; a lyricist who was rendered almost redundant in the face of the rock and roll onslaught, and a director famous for The Pink Panther, and being married to Julie Andrews – all that was hardly the first self-suggesting combination that might come together to fashion one of the most ethereal film songs of all time. 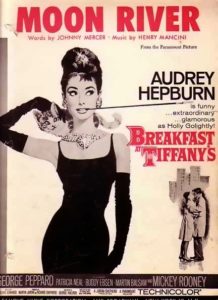 The actress was Audrey Hepburn, who had never had singing lessons and had a very limited range. Her Svengali-like husband, whose fourth wife she was, was screen actor, Mel Ferrer. The author was the spiky and outrageous Truman Capote, who wanted his friend Marilyn Monroe to play Holly Golightly.

The lyricist was Johnny Mercer from Savannah, who had written One for the Road and a dozen other standards before the rock era forced him into the temporary doldrums, and the composer was Enrico Nicola Henry Mancini, born in Cleveland, the son of Italian immigrants. He had composed The Pink Panther Theme. The movie director was Blake Edwards, whose birth name was William Blake Crump.

The film was, of course, the 1961 movie Breakfast At Tiffany’s. Capote’s risqué book, and the character Holly Golightly, was jointly based on a woman Capote used to know – Dorian Leigh Parker. She was a serial marrier (several marriages) and a collector of dangerous A-list liaisons. As model Dorian Leigh, she was famous all over the world. Capote became fascinated by her and, using the fire escape, frequently got into her apartment while she was out working. His eventual book homed in on the lady’s moral freedoms. And he was, he claimed later, angered and horrified by the way the film whitewashed Holly’s sexual adventures.

When it came to creating a song for Holly/Audrey Hepburn to sing in the film, Mancini was acutely aware of the limitations of Hepburn’s voice.

It was described as “threadlike and extremely limited in range, but always in tune”.
Mancini, a thoughtful and gifted composer and conductor, “took about a month and a half before he put down the first three notes,” according to his widow, Ginny. “It sounded promising, and in half an hour he had written the melody of the song.” He worked the whole song round a simple guitar basis, although the guitar isn’t heard much during the number.

Now it was up to Johnny Mercer to come up with the words.

Continue reading in this week’s issue of Ireland’s Own