Stranger Than Fiction – Did This Boy Remember His Old Life?

They took little Edouard Cabrero down the street of a strange town and he behaved as though he had come home. They confronted him with people he had never met and he knew their names and greeted them as friends.

His parents wept as he went up to a middle-aged woman in the street and said, “This is my other mother.” 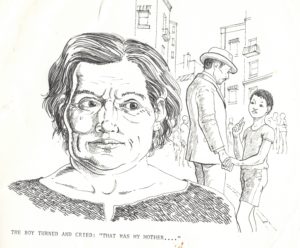 It seemed, on the face of it, that the impossible had happened. That the personality of another child, whom they never knew, and who is now dead, had taken over the mind of Edouard Cabrero.

Today, Edouard lives in the unclouded world of a nine-year-old with his family in a shabby suburb of Havana, Cuba. He talks repeatedly of his “other life”, of the friends he made and the things he did. He talks, too, of the night he died.

Experts have compiled detailed dossiers of the case, have tested the boy and tried to trick him, but Edouard continues to supply information he could not possibly supply in any orthodox way, about a boy who died before he was born.

At first his family laughed when Edouard, at five, began to tell stories about a brother and sister named Juan and Mercedes, and about a mother with fair skin and black hair. His parents thought it was a phase that would soon pass. But as the months went by, the boy talked increasingly about his “dream life”.

He said his mother used to make hats and sometimes she sent him on errands, particularly to a chemist whose goods were cheaper than elsewhere. But Edouard said he preferred going on longer errands because he could then use the bicycle which was kept in a downstairs room of his house.

The stories were so coherent, so consistent, that the family doctor, hearing one while making a call at the house, was intrigued and began to gently question the boy.
Edouard told him that he had become very ill. His mother had cried a great deal, particularly when an ambulance arrived to take him to hospital. He never arrived at hospital but died in the ambulance on the way there.

“I remember the light through the windows gradually going away,” Edouard told the doctor. “I was tired but not frightened or unhappy.”

“What was your name?” the doctor asked. “Pancho Seco,” said the boy. “We lived in Nuevitas.”

At least there was at last some definite clue. Edouard’s mother had relations in the Nuevitas district. She also knew that her son had never been there.
The following weekend the parents took Edouard on an outing to Nuevitas and passed a chemist’s shop. “Look,” cried the boy. “There it is – the shop I used to go to!” He tugged his parents along the street and round another corner. Running up to a house numbered 68, he shouted, “This is my house.”

His father knocked on the door but no one was in. Shaken, the family returned to Havana where a local clairvoyant was consulted. Could this be a case of reincarnation? How else could such a young child have accumulated such a wealth of accurate information?

By now, Mrs Seco had been contacted at number 68 and she confirmed that her son Pancho had died 11 years earlier. Would she agree to take part in an experiment?
Reluctantly she agreed and escorted by a team or researchers, Edouard returned to Nuevitas. The researchers brought a dossier with them, compiled from the boy’s alleged recollections of an earlier life.

He said that his mother’s first name was Amparo and his father’s Pierro. He had a brother and sister. He said the railway ran behind the house. His father worked for the post office and rose to work on a blue bicycle.

He named places in the country where the family had been taken for days out and described in detail what had happened on these occasions. He said he had once owned a dog named Tolo, which had been killed by a tram.

In all, the dossier contained over 50 such details of routine family life and Mrs Seco said they were all accurate. Most of them were things only her son Pancho could have known. Researchers then persuaded Mrs Seco to stand in the street while Edouard was taken past by his father.

When the boy spotted the woman he immediately shouted, “There’s my other mother – over by the shop window.” Mrs Seco hurried away, unable to cope with the unbelievable confrontation.

In another test, the boy picked out Pancho’s relatives and friends in a crowd and addressed them by names Pancho had used.

Today Edouard still astounds and upsets his parents by revealing new facts about what appears to be a previous life. But as the memories take shape they are unable to come up with any alternative to the theory that somehow a dead child’s spirit lives on in their son.

Read Stranger Than Fiction every week in Ireland’s Own