Stranger Than Fiction – Was It Murder By A Jealous Ghost?

The dusty twilight of a summer evening took on a jagged and sinister brilliance as the lane outside the English Cotswold village was lit by the light of flames. 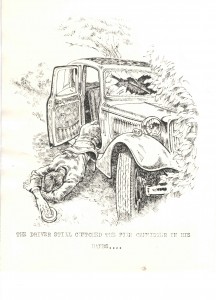 Soon a fire-engine from a neighbouring town rumbled between the high hedges and firemen ran forward to dowse the flames, but they were too late. Sprawled from the driver’s door of a blazing car was the body of a man.

He had obviously been struggling to escape when heat and fumes overcame him. Still gripped in his hand was a small movie-film canister, now so hot that the celluloid inside had disintegrated.
There were people who believed that the world of the supernatural had reached out to claim its secrets and to punish the person who had dared to try to take them. For it was claimed that on the film that Dr Edward Morton was taking to London for processing was evidence of a ghostly murder.
The film, taken through infra-red lenses on a July night in 1949, would undoubtedly cause a sensation in the world of psychical research. As it was, the man who took it was dead and the film now a shrivelled ruin.

When Edward Morton, an Oxford-educated doctor of science, decided to organise a ghost-hunt, colleagues knew that everything would be conducted with the precision of a military operation. That’s the sort of man Edward Morton was.
He had a team of ten cameramen, technicians, recording engineers, experts of psychical phenomena.
Note-takers would record in duplicate everything that happened. Infra-red cameras would bring the spotlight of modern science on to centuries of mystery and surmise.
Dr Mortan was a realist who believed that everything could be subject to scientific examination with profitable results: it was just a question of painstaking research. If you went on carefully enough, long enough, you could always get an answer.
So in the spring of 1949, Dr Morton mounted one of the most impressive scrutinies of the supernatural ever devised and chose Potterdene Hall, a decaying Cotswold mansion, for his tests. But it seems he got a good deal more than he bargained for.
Potterdene Hall was owned by an elderly industrialist who spent most of his time abroad. He wanted to sell the house and grounds and agreed that so long as no damage was caused, Morton could use the house for his experiments until a decision about its future was made.
The locals had long believed that the house was haunted. The ghostly occupants were said to include a cavalier who after a night of unsuccessful gambling had returned to Potterdene Hall and murdered his young wife.
With her dying breath she was supposed to have cursed him and declared that she would haunt the place so long as a wall was left standing. It was claimed that a ghostly enactment of the murder had been witnessed many times.
All in all, it seemed an ideal venue for Dr Morton’s research and at the beginning of June he moved in.

The hauntings were supposed to take place in a large ground-floor room with a french window opening on to a terrace and it was in here that the equipment was set up. A movie-camera, tape-recorder and a series of still cameras were mounted on easily-moved rubber-wheeled trolleys.
The team was split into three and organised into watches. Dr Morton would not have a regular watch but would be called if and when anything happened. A series of cameras with trip-wires would, it was hoped, take care of any hoaxers.
Soon the team had settled into a regular routine. Two people on watch would be in the haunted room the others patrolling the house. Dr Morton had an office in an adjoining room.
For a month nothing happened. Then in the first week of July, Frederick Redfern a psychic investigator and writer, claimed he had sensed a change in the atmosphere and he felt something was about to happen. The next night, according to witnesses, it did.
At 11 pm, according to the official report of the experiment, microphones hung throughout the house began to feed sound into amplifiers in Dr Morton’s room, and he switched on the recording tapes.
It was claimed there were voices, laughter and the movement of feet. Five other men, including Redfern, were roused to man the equipment and by midnight the temperature had apparently dropped five degrees.
Witness statements made by members of the team claimed that a figure of a man was seen in the corner of the room. Immediately the spools of the movie-camera began to turn and automatic cameras flashed a series of high-speed exposures. Redfern was later to claim he had seen the man attack a blonde woman with a dagger. She tried to clutch the man’s clothes but he tore away. Next day, in high excitement, Dr Morton left for London in his car, taking the tin of undeveloped film. Before leaving he rang a film laboratory saying he was bringing “something or great importance”. But he never arrived.
In the early evening, mysterious flames destroyed both Morton and his alleged evidence. Stills of the photographs, when developed, were blurred and inconclusive.
Frederick Redfern later wrote in a book on the experience: “The world of the occult, it seems, is jealous of its secrets. If Dr Morton’s fate is any guide it will protect them if necessary, even to the death.”

Read Stranger Than Fiction every week in Ireland’s Own