In spite of the growing popularity of coffee – and new coffee outlets seem to be springing up everywhere – the Irish are inveterate tea drinkers. According to Euromonitor, we have the second highest per capita consumption of tea in the world.

Tea drinking is very much part of the culture in Ireland and no visit to an Irish home would be complete if you were not offered a cup of tea. This is still very much the norm in many areas. From the householder’s point of view, the refusal, however polite, to share a cup of tea makes the visit seem somehow unsatisfactory. 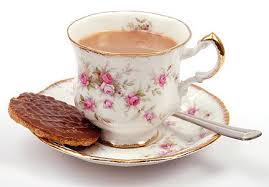 The insistence of Mrs Doyle, housekeeper to the hapless Father Ted, that everyone should have tea, encouraged by her catch phrase “Go on, go on, go on!” is a gentle caricature of that aspect of Irish hospitality.

The tea plant is a member of the Camellia family, cultivated in tropical and sub-tropical areas. It thrives in mountainous regions with good rainfall and a mineral rich soil. The tea plant is an evergreen, which in ideal conditions produces a new crop of leaf shoots every two weeks. These are picked and processed to produce the commercial product.
Tea comes in many different varieties and shades, but black teas are most popular in Western Europe.

The main tea growing areas are in China, India, Sri Lanka (formerly known as Ceylon) and Africa. It is also produced in Argentina and Brazil, the latter perhaps better known for its coffee. Over half the tea drunk in Ireland comes from East Africa.

In China, tea had been drunk for over 5000 years. The Dutch were the first to bring it from China to Western Europe, the first commercial shipment arriving in Amsterdam in 1606. At first it was an exotic and expensive drink because of shortage of supply and the high cost of transporting it from the Far East.

The British public were slow to take up the tea drinking habit, as tea was highly taxed at first. Until the dawn of the following century tea remained something of a novelty, enjoyed only by the rich.

In 1773, Britain imposed a heavy extra tax on tea being exported from Britain to her overseas North American colonies. As a protest, a group of colonists, disguised as American Indians, boarded three vessels in Boston harbour and threw their cargoes of tea overboard.

The Boston Tea Party, as it came to be known, was the initial act of rebellion that in due course led to the American War of Independence.

Initially, China had a monopoly in tea production, but in order to break that monopoly, the British established extensive tea plantations in India in the early years of the 19th century. As the product became more readily available, the price of tea began to fall and tea drinking increased in popularity in all classes of society.

So great was the demand for tea in the 19th century that the trade became an important part of British business. Fast sailing ships were designed and built specifically for the tea trade.

Tea drinking became well established in Ireland from the early years of the 20th century and its popularity has continued unabated. On all social occasions, be it a christening, a wedding or a wake, someone will always be passing around the cups of tea.

The traditional Irish way of making tea was to place loose tea in a slightly warmed teapot and add water that had just gone off the boil. After allowing the teapot to stand or ‘brew’ for a while, it was time to enjoy a cup with a dash of milk and sugar to taste.

However, loose tea has now been eclipsed in popularity by the tea bag. The tea bag was invented by accident around 1908 by New York tea merchant Thomas Sullivan, who used to send samples to his customers in small silk bags. Some found that they could make tea by simply soaking the bags in warm water. The mass-produced tea bag was introduced to the British market by Tetleys in 1953 and rapidly became a commercial success.

Tea drinking seems to be good for you. There is a strong association between tea drinking and protection against a range of health problems. Tea contains flavonoids, which have been shown to have powerful antioxidant properties. Antioxidants protect against human cell damage. Studies have shown that taking 3-5 cups of tea per day reduces cholesterol and risk of heart attack.

Long term consumption of tea has been shown to protect against some cancers. Black and green teas contain a substance called theanine, which reduces stress and improves concentration. So, in the midst of a hectic day, there’s absolutely no excuse for not having a cuppa!