The Ballad Sheet – The Curragh of Kildare

In the second week of May 1967, the Pye record label released a 45rpm disc featuring a beautifully harmonised rendition of ‘The Curragh of Kildare’: “The winter it has past, and the summer’s come at last …” Recorded at the Eamonn Andrews Studios in Dublin, it was sung by The Johnstons, the members of which included siblings Adrienne and Luci Johnston, as well as Mike Moloney and Paul Brady.

Entering the Irish Top Twenty within weeks, it was set to become ‘a regular’ in the repertoire of a host of up-and-coming Irish folk groups. But did the words and music originate in Ireland, or did they come from Scotland? 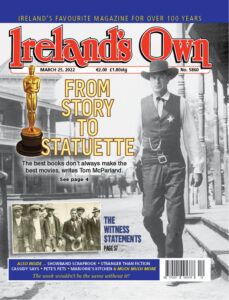 Our story begins in 1771, when a melody entitled ‘The Winter it is Past’ was published in James Oswald’s Caledonian Pocket Companion, a collection of mostly Scottish pieces arranged for flute, but this melody bears little resemblance to that sung by The Johnstons.

Moving on to 1787, ‘The Winter it is Past’ was included in another publication, The Scottish Musical Museum, and was accompanied by a few verses penned by none other than the Bard of Ayrshire, Rabbie Burns. Again, the melody differs to that used by The Johnstons, but the words they used are similar to those composed by Burns which went as follows:
The winter it is past, and the
summer’s come at last,
And the small birds sing on ev’ry
tree;
The hearts of these are glad, but
mine is very sad,
For my lover has parted from me.

Which now begs the question – did Burns actually write all of the words, or could he have borrowed some from elsewhere? Moving on again to 1855, the year in which Irish song collector George Petrie released his Ancient Music of Ireland.

Publishing the ballad as ‘The Winter it is Past’ or ‘The Curragh of Kildare’, almost note for note, and verse for verse, this is the same ballad as recorded by The Johnstons.

Continue reading in this week’s, Ireland’s Own