May 21st was the 85th anniversary of the early death of Charlie Poole, a banjo-playing, hell-raising bluegrass legend. Poole began life way back in 1892 when he was born in North Carolina. One of 13 children, Charles Cleveland Poole had Irish roots through his paternal grandfather who fled the Irish famine in the 1840s and arrived in Appalachia.

In May 1929 Poole acknowledged his roots when he wrote and recorded ‘Leaving Dear Old Ireland’ with his band The North Carolina Ramblers. This was at a time when Poole and his band were at their musical prime and the jaunty bluegrass song about an emigrant pining for the old sod was just one of over 60 songs they recorded during their artistic peak. 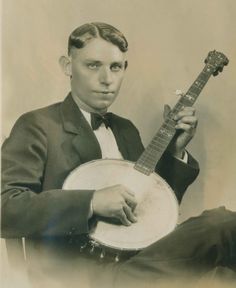 Poole’s banjo playing was deemed the most unusual but the best. He developed a three-finger-picking technique when, as a teenager, he tried to catch a baseball without a glove as a bet but he broke fingers in his right hand, never received first aid and the fingers never set properly which resulted in them being permanently curled in towards his palm. He didn’t mind the deformity, he was more upset about losing the bet!

Poole started work in the local granite mill at the age of 12 but like many others in rural North Carolina he was also a moonshiner. He bought his first banjo out of the profits he made from this illegal activity, then he set out to make a name for himself in the world of music, but his rough and rowdy ways always stood in the way.

At the age of 19, Poole met and married 17-year-old Maude Gibson but the settled life didn’t suit Poole. He was rambling around Canada with other hobos when Maude gave birth to their son James Clay. Some months later the couple divorced.

In 1918 Poole was rambling around West Virginia playing his banjo when he met a crippled fiddle player called Posey Rorer and guitarist Will Woodlieff and together they became The North Carolina Ramblers.

The trio got a contract with Columbia records in 1925 but success would not last long for Poole who was as much a legendary booze-hound as he was a legendary banjo-picker.
Later that same year they were playing in a roadhouse in Virginia when it was raided by the police. Instead of fleeing out the back door, Poole decided to take on the lawmen and hit him over the head with his banjo while beating another with Rorer’s walking stick.
Poole met his match when he tried to wrestle a policeman for his pistol and when the gun went off Poole tasted lead in his mouth. An arrangement was made for him to pay a fine instead of facing jail time.

This was just one of many antics that filled the short life Poole lived and his bad-boy image didn’t hurt his chance at a second marriage when he married Posey Rorer’s sister Lou Emma, who was 10 years older than him.

Although he came from the heart of Appalachia, Poole did not want to be typecast as a Hillbilly so he chose to don fine suits and bow ties but his hell-raising drinking sessions would take the shine off the clean-cut, suit -wearing image he tried and failed to concoct on stage.

Poser Rorer left the band in 1928 after a heated argument with Poole. It turned out that Poole was being sent royalty cheques from Columbia Records to give to Rorer but instead took the cheques to quench his thirst for liquor. It also soured his marriage to Rorer’s sister, Lou Emma.

When the great depression hit America it hit the music scene hard and Columbia cancelled The North Carolina Ramblers’ recording contract but Poole was given a second chance when Hollywood came calling in 1931.

Poole was asked to play music in a film and was given money by the film studio to purchase train tickets to L.A but he never did get to Hollywood. Poole took the train money and spent it on six weeks of hard boozing and partying. Poole’s epic bender would result in the loss of his life.

On the morning of May 21st, 1931, Poole was at his sister’s house when he declared “Old Charles been drunk a lot of times but this time old Charles is going to kick the bucket.” Later that day his heart gave in from the wildly excessive lifestyle he had been living and 39-year-old Poole collapsed and died on his sister’s front porch.

Poole was buried in Woodlawn Cemetery in Spray, Rockingham County, North Carolina, and lay there in an unmarked grave until a man from Omagh, Co. Tyrone, decided to give the bluegrass legend a grave marker in 1966. Rodney McElrea launched a fund-raising campaign through the pages of Country News and Views magazine and when enough donations were collected a fine granite headstone was erected over both Poole’s and Rorer’s graves.

With a banjo engraved on the stone and small picture of Poole, the marker reads: “Erected and dedicated by Rodney McElrea North Ireland and readers of Country News and Views.”

Charlie Poole was the original bad boy rock star whose life burst to the brim with stories of crazy antics and demonic drinking sessions that lasted from weeks to months at a time, but he still managed to make great music and set the standard for future country and bluegrass artists to live up to.