John le Poer and Nicola Hamilton were cousins born into titled families in the seventeenth century. Le Poer was the son of the Earl of Tyrone who was imprisoned in the Tower of London in 1681 for his part in a ‘popish’ plot. Nicola was orphaned the same year and both she and John were sent to live with a guardian in Dublin.

The two soon became good friends. They shared a fascination with spiritual mysticism and often pondered what might happen after death, vowing to each other that whoever died first would come back and visit the other. 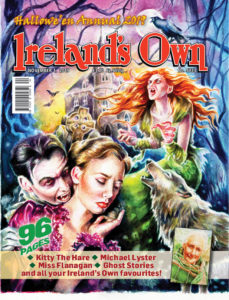 Soon after they made this promise Nicola was married off to Sir Tristam Beresford. The marriage produced two daughters, though Marcus was anxious for a son and heir.

John became Earl of Tyrone after his father died in the Tower of London in 1690 but three years later he too died, suddenly, at Curraghmore in Co. Waterford.

Nicola was staying with her sister at Gill Hall, in County Down. A few days later her husband noticed that was extremely pale and tired. He asked her if she was alright but she dismissed his concerns. Noticing that she was wearing a black band around her wrist he asked if she had hurt herself. She pleaded with him not to ask her any more questions and fled from the room.