1947 was the year of the Big Snow, the coldest and harshest winter in living memory when hundreds of Irish lives were lost. Turtle Bunbury recalls how the country was pounded by the most powerful blizzard of the 20th century. 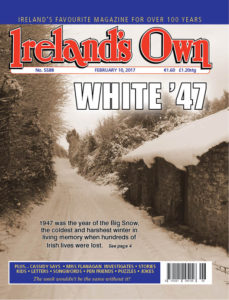 Glancing out his bedroom window in Ballymote, Co. Sligo, on the evening of Monday, 24th February, 1947, seventeen-year-old Francie McFadden shivered. The penetrating Arctic winds had been blowing for several weeks. Munster and Leinster had been battling the snows since the middle of January. It was only a matter of time before the treacherous white powder began to tumble upon Ulster and Connaught.

That night, a major Arctic depression approached the coast of Cork and Kerry and advanced north-east across Ireland. As the black winds began howling down the chimneys, so the new barrage began. When Francie awoke on Tuesday morning, the outside world was being pounded by the most powerful blizzard of the 20th century.
1947 was the year of the Big Snow, the coldest and harshest winter in living memory. Because the temperatures rarely rose above freezing point, the snows that had fallen across Ireland in January remained until the middle of March.

Worse still, all subsequent snowfall in February and March simply piled on top. And there was no shortage of snow that bitter winter. Of the fifty days between January 24th and March 17th, it snowed on thirty of them.

‘The Blizzard’ of February 25th was the greatest single snowfall on record and lasted for close on fifty consecutive hours. It smothered the entire island in a blanket of snow.
Driven by persistent easterly gales, the snow drifted until every hollow, depression, arch and alleyway was filled and the Irish countryside became a vast ashen wasteland. Nothing was familiar anymore.

Everything on the frozen landscape was a sea of white. The freezing temperatures solidified the surface and it was to be an astonishing three weeks before the snows began to melt.