The Birth of Irish Radio Broadcasting – 95 years on air

2RN was the first radio broadcasting station in the Irish Free State. It began broadcasting on 1 January 1926 and continued until 1933, when it was succeeded by Radio Athlone (later Radio Éireann). The station was run by the Irish Post Office, under the Department of Posts and Telegraphs, writes Gerry Breen.

New Year’s Day marked the ninety-fifth anniversary of the launch of 2RN, the first Irish radio station, on 1st January, 1926. The first voice heard from the new station was that of Douglas Hyde, a well-known Gaelic poet, who performed the official opening and who was to become the first President of Ireland in 1938.

Dáil Éireann decided that broadcasting should be a state service organised by the Department of Posts and Telegraphs and financed by licence fees, advertising revenue and import duties on wireless sets and components. Seamus Clandillon, a civil servant, teacher, singer and fluent Irish speaker, was appointed first Director of Broadcasting at 2RN, later renamed Radio Éireann. 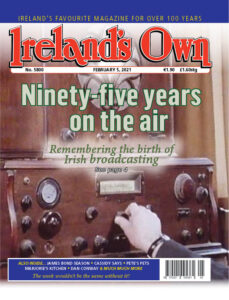 For most Irish people, the opening of the new radio station caused little excitement. In fact, it went practically unnoticed for a very simple reason: the vast majority of households did not have the equipment to receive the new radio station’s first broadcast. Back then, you could not go to a shop and buy a wireless set. You either had to make your own or do without. Even for those who had the right equipment, reception was problematic. You could be almost certain of plenty of background noise, and, at the best of times, the sound was likely to be quite fuzzy.

Wireless receivers were very primitive and bore little resemblance to the high tech. devices currently available. However, to hear anything ‘over the air’ was, of course, considered a marvellous achievement at the time. The quality of the sound and even what was said were only incidental. The miracle was hearing the voice or the music of someone who was performing many miles away. If you were lucky enough to have a wireless receiver, you were in possession of a very important status symbol.

The first 2RN broadcast was made in a post office building in Little Denmark Street, Dublin, and it was organised by the Station Director, Seamus Clandillon. He and his wife, Mairéad, who were both well-known singers of Irish folk songs, contributed to the programme.