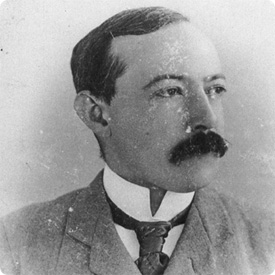 On the 125th anniversary of soccer’s penalty kick, Cathal Coyle looks at the man who made the radical proposal, Armagh’s William McCrum

Some sporting histories have chronicled that the first penalty scored in a game of soccer was by Alex McColl. The Renton player successfully converted his spot kick away to Leith Athletic in the Scottish League on August 22nd 1891.

However, another fact that has largely went under the radar, is that on January 6th that same year, the first ever penalty kick was awarded in a competitive fixture. That also occurred in Scotland, and the honour fell to Airdrieonians F.C. at their home stadium of Broomfield Park. And so began the life of one of Soccer’s most dramatic rules.

Later that year, the first penalty kick in English Football was awarded to Wolverhampton Wanderers against Accrington Stanley at Molineux Grounds on 14th September, and was scored by John Heath. The penalty rule had only been proposed the previous year – by William McCrum from Milford in County Armagh. The only son of Robert McCrum, a linen merchant, William was a former pupil at The Royal School, Armagh and graduated from Trinity College, Dublin in 1886.

William McCrum was a goalkeeper for Milford F.C., a small club that played in the Irish Championship’s first season in 1890-91. Playing in that position, he had witnessed the effects of breaches of the rules and similar unsporting behaviour on the field. His proposal placed the goalkeeper, a bystander up to that point, at the centre of the action.

Though his idea was initially derided and then followed by heated debates, McCrum was brave enough to submit his proposal for “a penalty kick” to the Irish Football Association. After due consideration, it was officially accepted on 2nd June 1891, almost five months after Airdrieonians had been awarded the inaugural penalty! Twelve months later, it was also approved by the International Football Association Board after the Irish F.A. presented it at the Alexandra Hotel in Glasgow. At that point, the penalty kick was incorporated into the official laws of the game of football.

It is interesting to note that, at the time, McCrum’s new invention wasn’t greeted with universal acclaim; in fact the English FA regarded it as a contradiction in terms. In their view, only gentlemen played soccer and gentlemen didn’t cheat, while sections of the press angrily condemned the “Irishman’s motion” as a “death sentence” for the game.
Although an Irish League founder and one of their key administrators, the young goalkeeper got little or no credit for the new rule. At that stage in the nineteenth century, when soccer was at an embryonic stage, who could have foretold just how important the penalty kick would become. It has gone on to decide the outcome of some of the world’s greatest football tournaments, including World Cup Finals.

For the first ten years of its life, the penalty kick was taken from a spot anywhere along a 12 yard line. Then in 1902, the International Football Board introduced the penalty area, 18 yards from the goal line and 44 yards wide with a penalty spot at its centre.
As for the dreaded ‘penalty shootouts’ that are now so prevalent in the sport, these were not immediately introduced. Knock-out games were decided through a replay or simply tossing a coin after the extra time had elapsed.

On the occasion where a replay was not possible, ties were decided by the drawing of lots. One famous example of this method was during the 1968 Olympics, when Israeli player Yosef Dagan watched his national team lose at the quarter final stage. The anguish of this defeat led to his proposal of the modern penalty shootout.

Dagan is credited for the origin of the penalty shootout, but this has been disputed by some reports which claim that a German referee, Karl Wald, had a similar proposal presented to the Bavarian F.A. in 1970. The proposal adopting a penalty shootout was adopted by UEFA in 1970; FIFA followed suit six years later, and the method has been used ever since at all levels of Football around the world. The first major international competition to use penalty shootouts was the 1976 European Championships tournament, and it was a magnificent penalty by Antonin Panenka that earned Czechoslovakia a win against favourites West Germany in the final.

From an Irish perspective, who could ever forget the famous penalty save by Packie Bonner from Daniel Timofte’s kick in the 1990 World Cup in Italy – and then the successful penalty by David O’Leary to send Ireland into the Quarter Finals of that tournament!

Read Ireland’s Own every Tuesday!