The Birth Place of Jesus Christ

The Church of the Nativity is a basilica located in Bethlehem’s West Bank and it is traditionally regarded as the site over the cave marking the birth place of Jesus. The church is situated in Manger Square, eight kilometres from Jerusalem and is the oldest Church in Christendom still in daily use.

It was originally commissioned in 327 AD by Constantine the Great, and his mother Helena, and was completed in 339 AD. 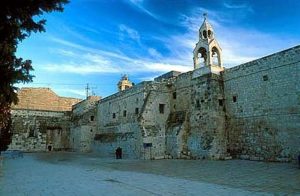 The Church had an octagonal floor and was placed directly above the cave where Christ was born.

In the centre a four-metre wide hole surrounded by a railing, provided a view of the cave. Portions of the floor mosaic still survive from this period. In 530 A.D., the Church was destroyed by Emperor Justinian, who built the much larger Church remaining to-day.
In 614, the Persians invaded Palestine and obliterated many churches. They spared the Church of the Nativity when they saw a mosaic on an interior wall depicting the Three Wise Man in Persian dress. Later the building was seized and defended by a succession of Muslim and Crusader armies, and this explains the fortress-like appearance of the Church’s exterior.

In the course of time, the complex was expanded by the addition of several chapels and monasteries belonging to different Christian churches. Today the Church contains three churches in one. The main part of the basilica belongs to the Greek Orthodox, another to the Armenian Church and one to the Roman Catholic Church.

It is designed like a typical Roman basilica with five aisles formed by Corinthian columns, and is entered through a very low door called the Door Of Humility.

The Church also features large gilded icons and a complex array of lamps throughout the whole building. Two stairways on either side of the sanctuary lead down by a winding stairs to the Grotto-the original birthplace of Jesus, and focal point of the Church.
The exact spot is marked beneath an altar by a fourteen-pointed silver star with a Latin inscription reading ‘Here Jesus Christ was born to the Virgin Mary’. The star is set into a marble floor and is surrounded by fifteen silver lamps representing the different Christian communities.

The stars fourteen points represent the number of generations of Jesus Christ from Abraham to David. They are also believed to represent the fourteen Stations of the Cross.

Numerous chapels are found on the compound also, including the Chapel of St. Joseph-commemorating the Angel’s appearance to Joseph, commanding him to flee to Egypt –
the Chapel of the Innocents commemorating the children killed by Herod, and also a Chapel to St. Jerome who traditionally translated the Bible from Hebrew to Latin.

In 2008, the basilica was listed as one of the world’s most endangered sites, but in 2010 the Palestinian Authority announced a multi-million dollar project for the Church’s restoration, and in 2012 the Church became the first Palestinian site to become a listed world heritage site.

Today the Church is undergoing an ongoing restoration programme with the entire roof structure being replaced, but it will without doubt continue to remain one of the most important and most visited Christian sites in the world today.