The Carlow Man who Became the First Limbless MP

Situated in the village of Borris in Co. Carlow stands the magnificent mansion of Borris House, the ancestral home of the MacMurrough Kavanagh family. It was built in 1731 by Morgan Kavanagh, a direct descendant of the Kings of Leinster and it has remained in the ownership of the Kavanagh family ever since.

It was in this splendid residence on 25th March, 1831, that Arthur MacMurrough Kavanagh was born.
Lady Harriet, Arthur’s mother cried out both with great joy and thanks for she was so pleased that her new offspring had been born to her and to no one else. A normal reaction by a mother to her newborn perhaps, but in this case it was because Arthur had been born with no arms or legs.

To be precise, Arthur was born with no arms below the lower third of his upper arm and no legs below his mid thigh, consequently he had no hands or feet. Nevertheless, his mother was determined that he would live a full, satisfying and eventful life. 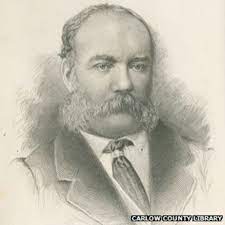 Her wish for Arthur was to be made good for as unfortunate as he was to have been born with such a misshapen body, he had the good fortune to have been born into one of the most wealthy families in Ireland.
The youngest of four, he was brought up to understand that his was not only a family of aristocrats and landlords but one that was dedicated to helping the poor and less fortunate.

With just the rudiments of fingers on the stumps of his arms he was destined to achieve the most incredible feats. Long before the advent of prosthetic limbs, at the age of three he learnt to ride horses by means of a specially constructed saddle.

Further into his early childhood he became proficient at fishing, hunting, drawing pictures and writing stories. He was of course being groomed for taking over the family seat and acting as landlord for all the tenancies on the estate.
He became quite unexpectedly the Squire of Borris by his 22nd birthday on the deaths of his father and two older brothers.

However, it was a time beset with all manner of problems with creditors and debtors, the majority of these being penniless tenants.
It was the aftermath of the Great Famine and whilst many had emigrated to America and England, there were also many left almost starving at home.
It was the policy of many landlords to evict their poorest tenants but this was not the way that the Kavanaghs ran things – they fed them.

Kavanagh realised that work was needed and he turned his talents in draftsmanship, learned on his early years travels in India, to good use in designing houses.

There was an abundance of timber and building materials on the estate and he also erected a sawmill.
In a relatively short time, the new houses were to form the village we see as Borris today. Arthur’s design for the houses won a prize from the Royal Dublin Society for the best designed houses at the lowest cost.
Kavanagh’s father had been an MP and this was perhaps the spark that ignited his son’s interest in local government. He was appointed High Sheriff of Kilkenny and later High Sheriff of Carlow. By the age of 35 he had contested and won the seat of the member for Wexford with a majority of 759.

It had always been a problem for many Irish MPs to get to and from Parliament and one would suppose even more of a problem for Arthur. The normal route was by rail to Cork and then steamer to Bristol thence by a five hour train journey to London. But regardless of his disablement, and unperturbed by the journey, Arthur utilised his love of sailing by commuting to Parliament in his own yacht making use of a long disused privilege of being allowed to moor his vessel under the Houses of Parliament for as long as he remained.

He would then be rowed to the Speaker’s steps and onward to the Member’s Lobby in his wheelchair. After being carried into the Chamber by his servant he would take his place with his servant having special dispensation to stay with him. He spoke frequently about the landlord’s obligations to look after their tenants and he was very outspoken on matters of the Poor Laws in Ireland.

Eventually losing his parliamentary seat, he later developed diabetes and then pneumonia. Shortly before his 58th birthday he died on Christmas day at his London home.

Arthur MacMurrough Kavanagh was an incredibly Christian statesman and exceedingly generous philanthropist. His lifelong goodwill to all fellow men, regardless of his serious infirmity should be inspirational to us all today.