The Centenary of Fatima

On May 13th this year the Holy Father Pope Francis will visit Fatima to celebrate an international Mass before half-a-million or more pilgrims. The occasion is the hundredth anniversary of the first of the appearances there by Our Lady to three little shepherds. Alan Frost recounts their story.

On May 13 the Holy Father will visit Fatima to celebrate an international Mass before half-a-million or more pilgrims. 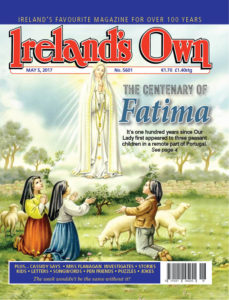 The occasion is the hundredth anniversary of the first of the appearances there by Our Lady to three children tending sheep in Fatima, an obscure region of central Portugal. This anniversary figured importantly in the life of Pope John Paul II, for it was on the 13 May, 1981, the Feast of Our Lady of Fatima, that an assassin tried to kill him. He strongly believed that the assassin failed only because Our Lady caused the bullet to be diverted from his heart.

On this Feast Day a year later, Pope John Paul II visited the Shrine of Fatima to give thanks and to have the bullet that nearly killed him inserted into the crown that is part of the statue of Our Lady of Fatima.

He again visited Fatima in the 2000 Jubilee Year on the May 13 Feast Day, and beatified the two children who died young, Francisco and Jacinta, in a ceremony attended by about a million people in the huge piazza in front of the basilica. The third child, Lucia, a Carmelite nun, was then still alive. Indeed she attended the event.

In London recently, Westminster Cathedral was packed for the visit of a representative (copy) Pilgrim statue of Our Lady of Fatima, in honour of this very special centenary.

The worshippers filled the nave and all the side chapels including the lovely one dedicated to St. Patrick. The love for Our Lady was manifest, and many showed their familiarity with the anniversary celebrations in Fatima by waving white handkerchiefs as they do in the huge plaza of the shrine.

In the shrine basilica by side altars approaching the sanctuary are the tombs of Bd. Jacinta and Bd. Francisco Marto, sister and brother, who died just short of their tenth and eleventh birthdays, and Ven. Lucia dos Santos, their cousin, who was told by Our Lady she would live “a little longer” to fulfil a divine mission; in fact she lived into her 98th year.

The origin of the teaching and purpose of Fatima through the experiences and devotion of the pasterinhos, the little shepherd children, did not begin with the first apparition of Our Lady, but in fact during the previous year.

In a rough hilly area called the Loca do Cabeço an angel appeared to the children in the spring of 1916. Telling them not to fear, he knelt with his forehead touching the ground and told the children to repeat three times the prayer he said: My God, I believe, I adore, I hope and I love You. I ask pardon of you for those who do not believe, do not adore, do not hope and do not love You! Then he disappeared.
In the summer he appeared to them again, by a well at the back of the house of Lucia’s parents in the nearby little village of Aljustrel. Francisco and Jacinta lived a short walk away, and about a mile from the Fatima parish church where they were baptised.

Continue reading in this week’s Ireland’s Own (issue 5601)