The Childhoods of Margaret and Mary Brigid Pearse

An extract from Sisters of the Revolutionaries: The Story of
Margaret and Mary Brigid Pearse.

The sisters of Patrick and Willie Pearse have long been overshadowed by their famous brothers but they also travelled interesting paths in life. Margaret was a teacher, Irish language activist and politician who shared Patrick’s educational vision for a bilingual education system and his political vision of an independent Irish nation. 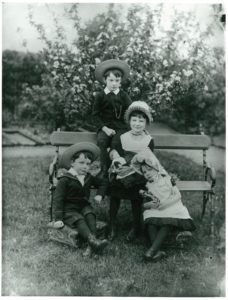 Mary Brigid was a musician, teacher, actress and author of short stories, children’s stories and dramas, but did not agree with her family’s political activism. Margaret and Mary Brigid never enjoyed a close relationship like Patrick and Willie; however, they both shared a deep affection for their brothers.

The children were born above their father’s business premises at 27 Great Brunswick Street, Dublin (now Pearse Street); Margaret Mary (b. 1878), Patrick Henry (b. 1879), William James (b. 1881) and Mary Brigid (b. 1884). Personal accounts of Margaret, Mary Brigid and Patrick recall memories of a happy childhood, a close-knit family and a religious upbringing. Margaret wrote, ‘our schooldays and youth were very happy with our loving mother and most devoted father. Our pleasures were simple and cultural.’

Their father, James Pearse was born in Bloomsbury, London to Mary Ann Thomson, a Unitarian, and James, a free thinker. He had two brothers, William and Henry. Due to straitened financial circumstances, the three boys worked from an early age. James moved to Dublin c.1859–60 to take up the position of foreman for the English architectural sculptor, Charles Harrison, who had premises in Great Brunswick Street.

James married Emily Susannah Fox in 1863 and they had four children, two of whom died in infancy. Emily died from a spinal infection in 1876.

James married his second wife, Margaret Brady, in 1877. She lived in North Clarence Street, Dublin and worked as an assistant at a newsagent/post office on Great Brunswick Street where James purchased his daily newspaper. Their first child, Margaret Mary, known as ‘wow-wow’ and ‘Maggie’ to her family was a precocious, bossy child. She adored her father ‘Papa’ and was very proud of his achievements. He, in turn, indulged her every whim. Fifteen months after her birth, Patrick Henry was born. Margaret was delighted to have a younger sibling with whom she could play, but perhaps, more importantly, whom she could ‘enlighten’.

As the elder sibling, Margaret’s opinion invariably prevailed. Patrick recalled, ‘she insisted that her wisdom and experience were riper than mine, and, by dint of hearing this again and again repeated, I came to believe it and to entertain for her a serious respect.’ On one occasion, Margaret encouraged Patrick to cut the tail off a toy horse his father had brought him from London; because the mane and tail of the ‘London horse’ were made of real horse’s hair, Margaret convinced him that it would grow back.

When it did not, Patrick soon realised that Margaret was not as wise or knowledgeable as she unfailingly led him to believe.

Margaret and Patrick played happily together as young children but because she was ‘both bigger and of a more dominating character’, she dictated the content and nature of their playtime, which frequently irked Patrick. She had a particular penchant for re-enacting battles that occasionally resulted in fatalities. Patrick believed that Margaret should take responsibility for burying her own dead, but to his great annoyance, Dobbin, a treasured wooden horse carved by his father, was often commandeered to carry the dead on a solemn journey for burial at Glasnevin Cemetery. These childhood games were simple but fondly remembered. Margaret and Patrick were most content sitting with their parents and their half siblings, Emily and James Vincent, in the drawing room in front of the fire watching the fire-fairy or playing with their pets, Minnie, the lazy cat and Gyp, their accident-prone hyperactive dog.

Margaret and Patrick were constant companions in their formative years, but the arrival of their brother William James (Willie) in 1881 ended the close bond they had shared in early childhood. The final addition to the Pearse family, Mary Brigid, generated much excitement in the Pearse household. When the nurse announced that the doctor had brought them a little sister, the children enquired from her how much their father had paid for the little girl; she replied, £100.

Mary Brigid suffered ill-health from a young age. The exact nature of her illness is unknown but she was often confined to bed for extended periods. Mary Brigid was often indulged and spoiled as a child.

Her social circle consisted of her sister and two brothers, but her closest bond was with Patrick. To say she idolised him would not be an exaggeration. During her periods of convalescence, it was Patrick who temporarily relieved her suffering and boredom by reading about the adventures of fascinating characters in weird and wonderful places.

Characters in books, such as Alice’s Adventures in Wonderland, Through the Looking-Glass, The Merry Adventures of Robin Hood, The Wallypug of Why and Prince Boohoo and Little Smuts were brought to life by Patrick. The hours that Patrick and Mary Brigid spent together as children definitely had a lasting effect on both siblings. Mary Brigid wrote plays, children’s stories and a novel. Patrick was inspired by Mary Brigid’s childhood convalescence to write several children’s stories that included sick children as characters such as ‘An Gadaí’ and ‘Eoghainín na nÉan’.

In between periods of convalescence, Mary Brigid participated fully in the family’s escapades. The young Pearses, together with their cousins, nieces, and nephews, had a particular fondness for all things theatrical and loved to dress up and disguise themselves as different characters. They transformed their drawing room into a stage and performed adaptations of Shakespearean plays or short plays written by Patrick. The children embraced their various roles with enthusiasm. 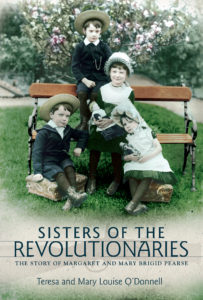 Their parents, James and Margaret ensured that their children grew up in a stable, close-knit and loving family; a happy home where the children’s creative talents flourished.

Sisters of the Revolutionaries: The Story of Margaret and Mary Brigid Pearse is
published by Merrion Press and on sale now in all good book stores.
For more details call (045) 432497 or visit www.merrionpress.ie