An occasional series on Irish horse and pony breeds by Patricia M. Jenkins

The Connemara is a powerful all-purpose pony. The breed takes their name from Connemara in Galway on Ireland’s wild, west Atlantic coast. A wind and rain swept place of bogs, boulders and magnificent mountains. 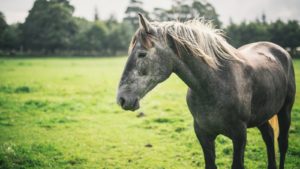 This makes for a terrain that is rough, rocky and uneven. It is here that these hardy ponies have long eked out an existence. Such an environment has undoubtedly contributed to the Connemara pony’s much admired qualities of strength, stamina and resilience.

One story tells of a wild Connemara named Windy Day swimming three and a half miles through five foot waves.

They were originally employed as pack ponies carrying corn, seaweed, peat and potatoes along Connaught’s craggy country roads. Their calm temperament and forbearance allowed them to stand for hours on bumpy bog land.

Along with their great capacity for hard work and their ability to endure sparse grazing solely on grass and gorse. In this way they maintained control of the vegetation by using their forefeet to break down the prickles thus making them edible.

The ponies are intelligent too with a great aptitude for jumping, even into old age. At a horse show in London in 1935 a twenty-two year old Connemara named ‘The Nugget’ jumped a seven feet hurdle.

These power their driving force thus enabling them to cover ground well with their clear and natural paces. This makes them ideal for a variety of equestrian disciplines including carriage driving, dressage, hunting and show jumping.