The Day The World Turns Green

To celebrate St. Patrick’s Day, Gerry Breen pays homage to some of the great acts that have put Irish song and dance on the global map…

For millions of Irish people around the world, the most important date in their social calendar is 17th March. It is the feast day of St. Patrick, Ireland’s National Apostle, and a day when people of many nationalities take on an Irish identity to join in the celebrations.
For many years, the St. Patrick’s Day celebrations in Ireland were muted. They tended to be formal and with a very strong religious flavour. Nowadays, as well as religious commemorations, there are colourful parades in almost every town in the land and the festivities embrace a host of different cultural events. 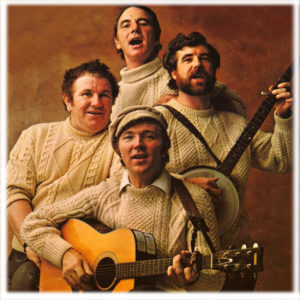 Irish-Americans really took the lead when it came to the greening of St. Patrick’s Day. Not only did they have the biggest and most colourful parades, but they also dyed rivers green and lit up landmark buildings with green flood-lights.

It is probably fair to say that the feast day of the patron saint of no other nation is so widely celebrated as is St. Patrick’s Day. So, from Mayo to Moscow and from Tipperary to Texas, people will be wearing the green on 17th March.

Dancing is one of the traditional ways for the Irish to celebrate and right now Irish dancing is enjoying tremendous popularity at home and abroad.

The dancing tradition stretches back over hundreds of years. An early reference appears in a letter to Queen Elizabeth from Sir Henry Sydney in 1569. He was writing about girls he saw dancing Irish jigs in Galway and this is how he described the dancers, “They are very beautiful, magnificently dressed and first-class dancers.”

In the eighteenth-century dancing teachers were in considerable demand in Ireland. These skilled dancing masters travelled from place to place passing on their knowledge to young men and women.

In pre-famine days, there were dances at the crossroads, and these were very popular social events.

When millions of people had to leave Ireland in famine times, they brought with them their music and Irish dances to every corner of the world.

When the Gaelic League was established in October, 1897, Irish dancing really stepped into the limelight. The Gaelic League held the first Irish Ceilí in Bloomsbury Hall in London, and this event featured bagpipe music, singing, dancing and refreshments of tea and cakes.

Nowadays there are all-Ireland championships and every year competitors from many countries take part in the Irish dancing world championships.

In 1994, a brief performance of Irish dancing called Riverdance was devised to fill an interval during the Eurovision Song Contest.

The performance lasted only seven minutes but it was electrifying and left those who saw it looking for more. This brief demonstration of the power of Irish dancing was watched by millions of viewers on television and it was absolutely breathtaking in its impact.