M.J. Wells takes a light-hearted look at the art of communication – or lack of it – in a marriage.

I heard a tale of a newly-wed husband, quite perturbed and peeved at his bride’s behaviour.
Patrick (name changed) hailed from County Antrim and was familiar with the old tale about Robert the Bruce getting a lesson on winning a battle by observing a spider in a cave on Rathlin Island. 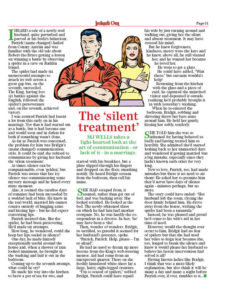 The spider had made six unsuccessful attempts to attach its web across a great gap but, on the seventh, succeeded. The King, having lost six battles against the English, followed the spider’s perseverance and, on the seventh, achieved victory.

I was assured Patrick had learnt a lot from this early on in his marriage. Not that it had started out as a battle, but it had become one and would soon end in defeat for both if something wasn’t done.

As far as Patrick was concerned, the problem for him was Bridgit’s (name changed) communication style. It could be said she refused to communicate by giving her husband the ‘silent treatment’.

At times silence can be companionable, even ‘golden’, but Patrick was aware that her icy silence was communicating some mystery message and he hated every mute moment.

Alas, it seemed the carefree days of romance had been succeeded by a wedded lack of bliss. He knew in the real world, married life cannot consist entirely of hugging arms and kissing lips – but he did expect conversing lips.

Patrick insisted that, like the spider, he had been persevering. He’d made six attempts.
How long, he wondered, could she keep her lips sealed in silence?