Helen Morgan traces the history of headwear, its fads and fashions

The first ‘Easter bonnet’ was not a bonnet or indeed a hat, it was a garland of leaves and flowers worn on the head to celebrate the coming of spring and dates back to pre-Christian times. With the darkness of winter behind them, the ancient peoples looked forward to the sun returning to the sky.

Throughout history women have traditionally covered their heads. In the past Irish women wore woollen shawls pulled up over their heads when leaving the house. Hooded cloaks later became the accepted mode of dress for the better-off. It was not until the end of the 16th century that women’s hats were first made. 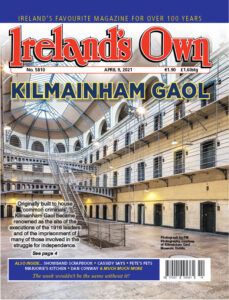 The first known hats were the Pileus, the Phrygian and the Pestasos. The former were simple skull caps while the latter was the cap given to freed slaves in ancient Greece and Rome. The first hat with a brim was called a Pestasos and was of Greek origin.

The word ‘milliner’ means ‘vendor of goods from Milan’ and dates back to the 16th Century. It wasn’t until then that milliners started to design and make hats for women.

From small beginnings the hat evolved over the centuries changing its shape and design many times. The 17th Century saw the introduction of the Capotain; a tall hat with a brim and a tapered crown and the Sugar Loaf; a hat with a high crown and a stiff brim as worn by the puritans.
The Tricorne hat became popular in the 18th century with artists and intellectuals favouring the Bicorne hat of the same era.

In the 19th century the Top Hat and the Bowler were introduced. The former was a tall silk hat for dress wear and the latter, a hard felt hat with a round dome-shaped crown designed by William Bowler, a well known hatter in 1850.
Around this time a straw-like hat called the Panama also appeared as did the Boater; a flat topped hardened straw hat with a brim, which is still worn today by Oxbridge students when punting on the river Cherwell.
Sir Anthony Eden, a former British Prime Minister, gave his name to a mushroom shaped hat which became popular in the Fifties.

In France, the beret is the most common form of head dress. The word ‘beret’ means ‘Basque cap’ and takes its name from the region in the south west of France where it originated.
The bonnet originated in Scotland where a soft brown brimless hat, similar to the beret, was worn by working men. Its colloquial name was either the ‘bunnet’ or the ,Tam-O’Shanter’. Scotland’s National poet, Robert Burns, made the Tam O’Shanter famous in his poem of the same name.