The ex-Black & Tan with three mother-in-laws

Below are extracts from The Black & Tans, 1920-1921, a complete alphabetical list, short history and genealogical guide’ by Jim Herlihy including the Royal Irish Constabulary Special Reserve, Temporary Constables and the Veterans and Drivers Division, 1920-21 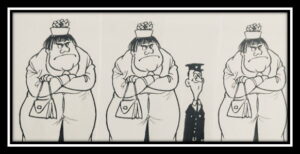 AN EX-BLACK & TAN’S TRIALS – THREE RIVALS MOTHERS-IN-LAW. Thus, reported the Paris correspondent of the Irish Independent in July, 1929. “To have three mothers-in-law living with him under the same roof was the fate of Alfred Tomkinson, an ex-soldier who served with the Black & Tans.”

He served in the Great War during which time he married a French girl and after the war he lived with her and his mother-in-law in a suburb of Paris.

He was 5’6½, married since 31 July 1915, an ex-soldier and former plumber when he enlisted in the Royal Irish Constabulary Special Reserve at the recruiting Office in Liverpool on 20 May 1921 and after his brief initial training in Gormanston Camp he was transferred to Co. Leitrim until disbandment on 3 February 1922, earning an annual pension allowance of £46.16s.0d. He then returned to Paris.

His wife died and he married her cousin, who insisted on her mother living with them, and thus Tomkinson found himself with two mothers-in-law.

After a time they began to quarrel and he appealed to the courts for their removal, but in vain the magistrate insisting that in French law he had taken on responsibility for the housing of two ladies according to the terms of the marriage contracts. A new complication arose in the shape of a third woman who declared that she was the mother of the first wife and the lady in the house was an imposter. Her papers seemed to prove this.

There was, however, some legal quibble regarding the circumstances under which she abandoned her home and daughter to the other woman, and until this point was cleared up, Tomkinson could not be sure which is the mother-in-law and which is the imposter.
In the meantime, the magistrate ruled that he had to allow the third lady to live under his roof until her status was settled by the courts. It was reported that Tomkinson was in receipt of many ironical letters as the world’s most mother-in-lawed man.

He did not want to say anything about the whole affair, but thought much that was unprintable, and said that he would rather be back in Ireland with the Black and Tans than living the life that the presence of three mothers-in-law imposed on him. Alfred Tomkinson died in 1965 in Crumpsall Hospital, Manchester.