The Fanore School Case ranks as one of the most controversial episodes in the history of lrish education. Over the one hundred years since it first emerged, the affair has come to signify different things to different commentators. Some have seen it as symptomatic of a society strangled by institutional Catholicism, while others, mainly in the teaching profession, have viewed it as revelatory of the injustices casually and commonly visited on national teachers before the efforts of the Irish National Teachers’ Organisation put an end to them. The events that unfolded at Fanore National School in 1914 represented less an educational dispute than a grave crisis of community which left enduring divisions in its wake, writes Joe Queally.

The Fanore School Case is one of the most bizarre episodes in the history of Irish education. At the centre of the case was Michael O’Shea from Kenmare, Co. Kerry, principal teacher at Fanore National School, who was dismissed from his post in 1914 by the school manager, the parish priest, Fr. Patrick Keran, allegedly for refusing to marry the assistant teacher in his school, O’Shea himself being engaged to another local girl at the time. 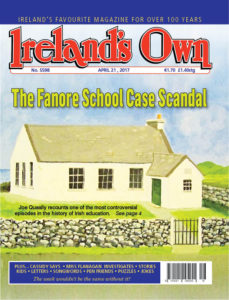 O’Shea had written to his manager Fr. Keran seeking his permission to marry Katie McDonagh, with whom he was in love. A few days after receiving the post the priest called to O’Shea and, by O’Shea’s account of what happened, he claimed the priest came into the school and in no uncertain manner told him that he wouldn’t give him permission to get married to Katie, but that he must marry the assistant teacher in the school.

The priest said it was desirable that two teachers in the one school be married and living in the one residence provided. The priest went on to say that O’Shea’s tenure in the school depended on his marrying the assistant teacher.

Continue reading in this week’s Ireland’s Own (issue 5598)