The Final Curtain – the night Cork Opera House burnt down

The date was 12 December, 1955. It was a cold, miserable night in Cork, made all the worse by torrential rain and an easterly wind howling up from the harbour. And, on this particular night, there happened to be an exceptionally low cloud ceiling which, eerily, reflected the lights of the city back down on the few hardy souls still abroad and hurrying home, some with their early Christmas shopping tucked safely under their oxters.

The unusually low clouds had set some older people remembering how, on such a night thirty-five years before to the very day, the sky over Cork was illuminated by the biggest conflagration experienced since the Siege of Cork in 1690.
On a date firmly etched in the collective memory of a generation, at the height of the ‘Troubles’ on the night of 11/12 December 1920 Crown forces had torched great swathes of the city’s principal shopping centre which burned for days. Now, they could hardly believe their eyes when, for the second time in their lifetime, the whole firmament took on an angry orange-red hue which rolled and boiled, emanating, it seemed, from the very depths of Hades itself.

The startling news quickly spread throughout the city: the Opera House was on fire! 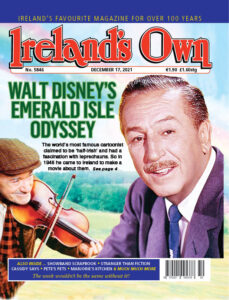 The Opera House had not been built from the ground up as a dedicated theatre; it was a mish-mash of numerous additions over many years. Modern fire protection measures were lacking. Under existing legislation there was only so much a local authority could do to regulate such a venue – bar actually closing it down.

In short, it was an accident waiting to happen in a building no longer fit for purpose.

On Monday evening, 12 December 1955, the principals of the forthcoming Christmas panto, The Sleeping Beauty, had assembled in the old Circle Bar for rehearsals. After a while some of the principals remarked that they could smell smoke and they notified Bill Twomey, the theatre manager.

They could find nothing, although the smell persisted. Erring on the side of safety, Mr Twomey decided to inform Cork Fire Brigade. At exactly 9.04 p.m. the first ‘999’ emergency call was logged. Explaining the situation to the dutyman, he described the smell as ‘if a cigarette were smouldering’.