The ‘Gentle Giant’ of Country Music is celebrating thirty years in showbusiness. Con McGrath met recently with the star.

This year is shaping up to be a busy one for Mick Flavin as he celebrates thirty years performing in Country Music. Over that time Mick has become a household name not only in Ireland but all over the world, entertaining audiences with this rich voice and hit songs such as Wildflowers, Maria’s Heading Out To California, Never Too Old To Feel Young At Heart and I love Ireland best of all. 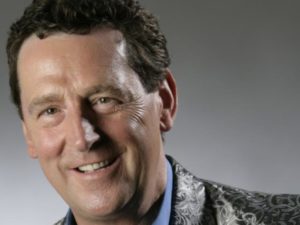 Intending to interview this great star of country music, I made my way to the picturesque town of Drumlish, Co. Longford (which is also home to that other great star of Country Music – Declan Nerney). Following the directions given to me by Mick (as he prefers to be known) I drove a little ways out from Drumlish and quickly caught sight of his home. “You will know my house when you see it,” the singing star had told me, “the van marked ‘Travellin to Flavin’ is parked outside.” Sure enough it was.

For 30 years now, folks have been ‘Travelling to Flavin’ to enjoy a night’s entertainment, be it a sit down concert or a night of dancing. Oft times it will be both.

The songs they enjoy are those well known singles, now firm favourites on the Irish country music scene. Great hits like I’m Gonna Make It After All, The Old School Yard and the rousing Someday You’ll Love Me. These songs have made Mick a household name not just here in Ireland but all over the world.
Arriving at his home, I was greeted by Mick’s wife, the former Mary Doyle, a native of Enaughan, near Moyne, Co. Longford. Escorted into the front sitting room, I awaited his arrival. Dotted around the room, the whole house in fact, are many trophies, awards and mementoes, from his incredibly successful singing career.
Suddenly he appears. The great Mick Flavin himself, standing an impressive 6 foot 4. Immediately Mick, by his very modest nature, puts one at ease.

In fact as I set up the video camera to record his life story, I happened to mention that today was my birthday, upon which Mick Flavin immediately bursts into a rendition of Happy Birthday to You. (I am proud to say I captured this moment on camera – what a memento of my own to have).

It is worth pointing out that this spontaneous gesture by Mick Flavin at once reveals the man, a man who constantly thinks of other people, always putting other people’s stories above his own. It is these considerate qualities that make Mick so special, justifying completely his reputation as the ‘Gentle Giant’ of Country Music.

Continue reading in this week’s Ireland’s Own (issue 5595)