He was known as the musician’s musician – the Great Michael O’ – and with his showband orchestra played to thousands of people for more than forty years in dancehalls from Allihies to Bundoran, from New York to Bahrain. He was Mr Music.

Michael O’Callaghan was born in 1932 in Buttevant, North Cork, and from an early age his musical abilities were evident for all to see. Before he was even a teenager, he was playing the tin whistle with more seasoned traditional musicians at various crossroad dances throughout his locality. 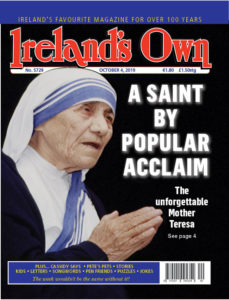 He came to the notice of the Mercy Sisters in the town, particularly Mother Nolasco Byrne, who had started the Buttevant Brass Band in 1937. Joining at age thirteen, Michael learned to play trumpet, clarinet and flute and soon was not alone one of the band’s leading members, but in time its youngest conductor.

He became particularly accomplished at the saxophone and it was this instrument that he played with various orchestral bands that toured Ireland with theatre groups popular at the time, known as the fit-ups.

While touring he met and subsequently married professional dancer Eileen O’Callaghan, originally from Devinish Road in Dublin. However there weren’t many opportunities for young men in post-war Ireland and so Michael and Eileen emigrated to England where he found work with Hanley Page aircraft manufacturers near London.

But music was his true calling and he returned to Ireland just in time for an explosion in popular music throughout the country.
By the mid 1950s a new trend was developing in entertainment. Dance bands were drawing big crowds to community halls in villages and towns across Ireland and names like Donie Collins, Jim Farley, Maurice Mulcahy and Donie Regan were on everybody’s lips.

The young Buttevant musician was in high demand in this growing music world, not just as a performer but also as an arranger. Many bands called on his abilities to score the latest hits heard on the BBC or Radio Luxemborg to suit their individual band sounds as well as their vocalists.

In 1956 Michael O’ decided to form his own band and was joined by his two brothers, Bobby and Patsy, as well as Buttevant keyboard player Maureen Guiney, an unusual move to have a female musician so early in the showband scene.