The Ha’penny Bridge at 200 years old

The Ha’penny Bridge is the best known of Dublin’s bridges. It was built in 1816 and it was the first iron bridge in Ireland. It is a single span structure with cast iron railings and decorative lamps. It was originally named the Liffey Bridge but it is now called the Ha’penny Bridge because there was a half-penny charge to cross it until 1919.

Proposed by two Dublin City Aldermen at the time, John Beresford and William Walsh, as a shortcut to the Crown Street Theatre, the bridge lease was granted to Walsh. It was a lucrative business and it yielded an annual income of £329. 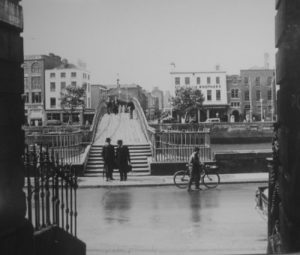 Cast at Coalbrookdale in Shropshire in England, the bridge acquired its unofficial name from the toll which was paid at the time to cross the River Liffey, one old half-penny. The Ha’penny Bridge was the only pedestrian bridge on the River Liffey for 184 years until the Millennium Bridge further up was completed and opened in 2000.

The Ha’penny Bridge has three lamps which are supported by curved ironwork over the walkway. The bridge was in need of repair and it was closed in 2001 to undergo a major restoration. It was reopened with its original paint colour restored and changes were made at the ends to allow standing room for pedestrians before crossing the road. The original line of the decking was restored.

Before the Ha’penny Bridge was built there were seven ferries which were operated across the River Liffey by William Walsh. The ferries were in bad condition and Walsh was informed at the time that he had to either fix them or build a bridge. He chose the latter option and he was granted the right to extract a half-penny toll from anyone crossing it for 100 years.

Initially the charge was based, not on the cost of the construction, but to match the charges levied by the ferries which it replaced. A further condition of the construction was that, if the citizens of Dublin at the time found that the bridge and the toll were ‘objectionable’ within its first year of operation, it was to be removed at no cost to the city.
The first pedestrian bridge to cross the River Liffey, it was a welcome relief for the citizens of Dublin at the time who were accustomed to vying with horse, carriage and cart in an era before any demarcation between vehicle and man on the public highways or bridges.

It retained its position as the only pedestrian bridge to span the River Liffey until the Millennium Bridge was completed and opened 184 years later in 2000. World renowned as the Ha’penny Bridge, in reference to that toll, but officially the Liffey Bridge since 1922, it has variously been known as the Wellington, Metal, Triangle and the Iron Bridge.
The Bagnio Slip, near an infamous brothel, no longer exists and the crossing now takes pedestrians from Merchant’s Arch to Liffey Street on the north side.

The bridge has a span of 43 metres, is 3 metres in width and rises an elegant 3 metres above the River Liffey.

The superstructure is composed of three arch ribs, each formed in six segments. Seen today in the original off white colour, it has, in the past, been dignified with less complimentary tones : black and silver and covered in advertising hoardings.
Dublin City Council undertook an extensive refurbishment of the bridge in 2001 with engineers and conservationists who worked together on the award winning restoration. The restoration work was carried out by Harland and Wolff of Belfast (of ‘Titanic’ fame) and the bridge was reopened 15 years ago on December 21, 2001.

The quality of the work was recognised when it received a European Union Cultural Heritage/Europa Nostra Award in 2003.

In 1816, 200 years ago, only 450 people crossed the Ha’penny Bridge when it was first opened. In 1916, the Ha’penny Bridge would have offered very little protection to the Volunteers who crossed it on their way to the G.P.O. during the Easter Rising. In 2016, 200 years after it was first opened and in a vastly expanded Dublin City, an estimated 40,000 people cross the bridge each day and would be glad to pay a half-penny to do so.