The History of Powerscourt

Kay Doyle looks at the history of Powerscourt House and Gardens in County Wicklow, one of Ireland’s finest estates which attracts thousands of visitors each year.

If Wicklow is the ‘Garden of Ireland’, then Powerscourt Estate in Enniskerry is surely the best spot in the garden to be on a summer’s day. Or any day really. Steeped in history, this large country estate and magnificent garden are a hugely popular tourist attraction with over half a million visitors every year.

The house was originally a 13th-century castle which underwent extensive alterations in the 18th century, changing its appearance dramatically. The original owner of the castle was a man by the name of de la Poer (anglicised as Power) which is where the name ‘Powerscourt’ comes from. In 1603 King James 1st granted Powerscourt to one of his generals, Sir Richard Wingfield, after he successfully quelled a rebellion of local Irish chiefs in Wicklow. 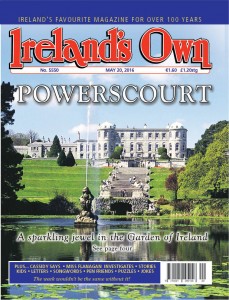 The Wingfields later became the 1st Viscount Powerscourt who began to build on the site of the old medieval castle. He wanted to make his mark and assert his position as a ‘Big House’ of importance in society. In 1730 he commissioned the German-born architect Richard Castle to build Powerscourt House, a 68-room mansion which was completed in 1741.

Construction of the house began around 1731 in the Palladian style which was popular at that time. The house was comprised of a massive central block and twin pavilions which stretched out either side to obelisks topped by the Wingfield eagles. It has been described as having ‘the massive dignity of a great Italian Renaissance villa.’

It boasts a magnificent entrance hall, where family heirlooms were displayed, with the main reception rooms interestingly built on the first floor rather than on the ground floor. A mile-long avenue of beech trees leads to the house, adding to its splendour and importance . In fact, Powerscourt is considered by some to be Castle’s finest work.