The Heineken Cup was launched in the summer of 1995. In the same year Irish Rugby Football Union (IRFU) made the bold decision to turn professional.

It seemed to have been the wrong one, when Ireland finished bottom of the Five Nations Championship three years in succession. 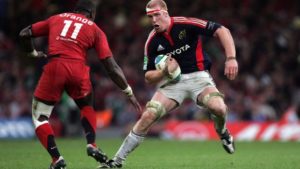 Progress would be slow for the game at elite international level, but green shoots would soon emerge on the provincial front.

They competed in four pools of three with the group winners going directly into the semi-finals. England and Scotland declined to enter the inaugural Competition.
The first ever Heineken Cup match took place in Romania. Farul Constan, a semi-professional cub located in Dobruja region of Romania, took on the might of French powerhouse, Toulouse.

Despite the unlikely setting their would be no fairy tale start to the new tournament. Toulouse prevailed by 54–10, in front of a sparse attendance.

The French side would go on to become the first European Cup winners, when edging Welsh outfit, Cardiff, in extra-time, in front of a crowd of 21,800 at Cardiff Arms Park. English and Scottish sides joined the fray in 1996-97, as the competition expanded.
In the 1998–99 season, Ireland made their mark on the competition, when Ulster became the first Irish province to win the Heineken Cup. They beat French outfit, Colomiers, in the final at Lansdowne Road by 21–6. The Ulster squad contained a number of part-time players within its ranks, including Andy Matchett and Stephen McKinty, who both started the final.

Continue reading in the Ireland’s Own Valentine’s Special