The Irish on 75 Years of Desert Island Discs

The Irish on Desert Island Discs

On the 75th anniversary of BBC Radio’s Desert Island Discs, Jim Devereux takes a look at the choices of some of the Irish people who have appeared on the extremely popular show.

One evening in 1941 the English broadcaster, Roy Plomley, was relaxing at home in his pyjamas when an idea came to him for a radio programme. He sat down and wrote a proposal to the BBC which was accepted and in January, 1942, the first edition of Desert Island Discs was broadcast and it is now the BBC’s longest running radio programme.

For those unfamiliar with the format, the programme begins with its very distinctive signature tune, By the Sleepy Lagoon, accompanied by the screams of seagulls.

A celebrity guest is introduced and as they reveal their favourite eight pieces of music they are questioned about their lives and work. At the end of the show guests select; a single music recording, a book and a luxury item that they would take with them to the desert island. In addition to their book selection they would be given copies of the complete works of Shakespeare and the bible to read. 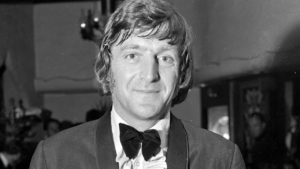 Roy Plomley continued to present the show until his death in 1985 when he was succeeded by the TV broadcaster Michael Parkinson and then by Desert Island Discs’ first female presenter, Sue Lawley. The Scottish journalist and broadcaster Kirsty Young took over the show in August 2006, and continues to host the show.

Over the 75 years since the programme was first broadcasted politicians, a wide range of actors, writers, musicians, scientists and academics have featured, including a number of prominent Irish people.

William Trevor, the late novelist and short story writer, appeared on the show in 1980 and recounted his upbringing in different towns across Cork. We hear that he fell in love with his wife at Trinity College, Dublin, where she introduced him to the composer Bach and he introduced her to tea without milk. Trevor’s selected book was Lives of the Saints by Alban Butler, and grapes were his luxury item. Seamus Heaney, another Irish literary giant, appeared on the programme in 1989. Heaney’s favourite book was James Joyce’s Ulysses, in his words an account of the “vindictiveness of Dublin”. Heaney obviously anticipated walking around the island a lot as the luxury item he requested was a pair of Doc Marten boots.

The author Edna O’Brien appeared twice on the show and her book of choice was also Ulysses. The disc that she would take to her desert island was the haunting version of The Foggy Dew as recorded by Sinead O’Connor and The Chieftains. Clearly O’Brien didn’t anticipate doing much on the island as her luxury item extended to a whole vault of ‘a very good white wine’.