The Irish & the San Francisco Earthquake of 1906

In an introduction to his new series The Irish & the San Francisco Earthquake of 1906, Cian Manning shares fascinating stories of some of the Irish players in Californian society at that time whose lives would be changed forever by one of the world’s most famous natural disasters.

THE EARTHQUAKE
At 05:12 AM on Wednesday 18th April 1906 one of the worst and deadliest earthquakes in the history of the United States struck the coast of northern California. It was caused by the San Andreas Fault which runs the length of California at 810 miles (1,300km) from Cape Mendocino to the Salton Sea.

The seismic activity saw a maximum Mercalli intensity of XI (Extreme) measured of the shaking produced by the quake – the estimated moment of magnitude is placed at 7.9 – which was felt from Eureka (270 miles/435 km north of San Francisco) to the south of the San Francisco Bay Area. The catastrophe was further compounded by devastating fires breaking out, reaching temperatures of 2,700 degrees Fahrenheit, in San Francisco lasting several days which destroyed more than four-fifths of the city and left over 300,000 people homeless. Approximately 28,000 buildings were burnt in an area of four square miles. 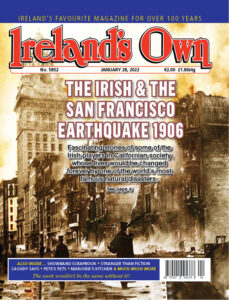 Estimates of the lives lost as a result of the earthquake stand at over 3,000 people and it is the greatest loss of life from a natural disaster in the history of the state of California.

The Irish population – Irish born or of Irish descent – in the Golden Gate City was placed at 100,000 people by the Kerry Weekly Reporter at the time of the disaster. Irish Catholics attended St. Patrick’s Church which in 1872 boasted 32,000 parishioners, the vast majority of whom were Irish.

Many of them had travelled to the West Coast seeking opportunity and fortune as the Irish community thrived in ’Fresco while the traditional strongholds of Boston and New York were in a period of decline.

They certainly didn’t expect a cataclysmic catastrophe of a natural disaster which occurred that April morning. The shock took 48 seconds to change everything. The recovery took far longer.

One Irish paper described the tremor as causing San Francisco to sway ‘like a feather in the wind’. As streets, skyscrapers and factories crumbled to the ground it appeared that the areas primarily frequented by the Irish community in the Bay Area were least affected, though not untouched by the tragedy.

In the days after the quake it was believed that €40m worth of property had been destroyed as survivors looked to rebuilding the city which had been almost completely demolished in the space of four days.

SURVIVORS, WITNESSES & SUFFERERS
The night before the upheaval saw Mary and Rose Curran (sisters of Willie Curran, Clerk of Works to the Dundalk Urban Council) attend a recital by Caruso at the Opera House. When they retired to rest they were awoken by a sudden swaying of their house. Rushing to the street they could see the destruction underway and heard the sounds of screams from people half-buried under debris or calling for help as their buildings became engulfed in flames.