Susie Kearley examines the history of ‘the most feared and hated institution ever established in Ireland’, where people sought refuge from the dire poverty which was the lot of so many Irish people in the nineteenth century.

The workhouse was introduced into Ireland as part of the English Paw Law system in 1838. The British government saw the system as the most cost-effective way of tackling the desperate state of poverty in Ireland. At that time the population of Ireland was approximately twice what it is today and many of those eight million inhabitants were suffering from disease and starvation. 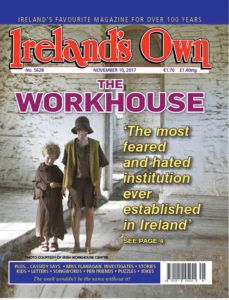 By 1845, 123 workhouses had been built and the cost of poor relief was met by the payment of rates by owners of land and property in that district. Each union was overseen by a Board of Guardians which consisted of elected members, magistrates and justices of the peace. Conditions of entry into the workhouse were strict and entry was seen as the very last resort.

Visit an Irish workhouse and heritage centre and you’ll hear sad tales of poverty and desperate need, which drove a growing demand for workhouse places in the 18th and 19th centuries. Some of those historic buildings are now open to the public and provide a vivid reminder of Ireland’s bleak and troubled past.

In 1703 an Act of Irish Parliament was written to provide a ‘House of Industry’, which would give employment to the poor in Dublin. The workhouse was built and a board of governors managed admissions, enforced discipline and inflicted punishments, maintaining strict adherence to the rules.

The workhouse was home to orphans, the elderly, ‘sturdy beggars’ and ‘disorderly women’. They were crammed into dormitories, separated by class, and fed mostly, bread, milk and porridge. They must have had a source of vitamin C – probably potatoes – or they would have died of scurvy; perhaps some did.