As well as founding Celtic Football Club, Sligo-born Brother Walfrid did great work for the poor of Glasgow and London, writes Jim Devereux 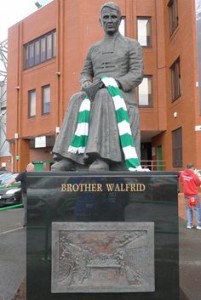 If you ever find yourself in the east end of Glasgow, a trip to Paradise, also known as Celtic Park, is obligatory.
Close by the main entrance to the ground you will find a bronze statue dedicated to the memory of Brother Walfrid, revered as the founding father of Celtic FC. Last year marked the 100th anniversary of his death.
Although founding Celtic is some legacy, what is perhaps less well known is the extent of his work with the poor people of Glasgow and, later in his life, London.
Walfrid was born Andrew Kerins in the village of Ballymote in County Sligo, in 1840. This was an area ravaged by the effects of the Great Famine and like many thousands of his compatriots, Kerins left Sligo as a young man and headed for Glasgow, Scotland. This was a well trodden route for young people from Ireland even before the famine. By 1840 Irish Catholics, predominantly working as labourers in Glasgow’s mills, docks and railways, represented a quarter of the city’s population.

Little is known of his early years in Glasgow but at the age of 24 Andrew Kerins joined the Marist Brothers and took his life-long vows of poverty, obedience and devotion to Mary.
The Marist community were very much focused on the teaching and education of young people and had their origins in France, being formed by a French priest, Marcellin Champagnat in 1817.
On joining the community Andrew Kerins travelled to Beaucamps, near Lille, in France, to undergo four years of training and take the name of Walfrid. On his return to Glasgow,  Brother Walfrid was appointed a teacher  at the junior school in St Mary’s church, Calton.
It was during his time at St Mary’s, and later when appointed headmaster at Sacred Heart School in Bridgeton, that he would have become fully aware of the devastating affects of the hunger and poverty that existed in Glasgow at that time.
Glasgow was Europe’s most densely populated city and disease and suffering were endemic.
In 1888 it was recorded that of the 11,675 registered deaths nearly 5,000 were children under the age of five.
As a teacher at St Mary’s, Brother Walfrid set up a football league and a literary society to encourage children to read outside of school.
He also developed links with local employers to provide work opportunities for his pupils when they were ready to leave school.
But he would have known that education was not a priority for children who were hungry and dressed in rags.
Displaying care, compassion and courage, Brother Walfrid was determined to address the barriers that prevented children in extreme poverty from attending school.
It was largely down to his drive and enthusiasm that led to the creation in 1884 of the ‘Penny Dinners’ for his students and the children of the parish.
Working closely with the St Vincent de Paul Society, which had been established in Glasgow in 1848, Brother Walfrid helped to ensure that every child attending school was a provided with a hot, nourishing meal on a daily basis in return for their penny. The major challenge for the Marist Brothers and the SVDP was how to raise sufficient monies to meet the growing demand for this initiative. Charity football matches were an established method of fundraising, harnessing the growing popularity of football amongst the working classes.

In April, 1887, over 12,000 spectators attended a charity match in Bridgeton in aid of the Poor Children’s Dinner Tables of St Mary’s and Sacred Heart School. The game was contested by local Glasgow team Renton and the Edinburgh team Hibernian, the Scottish Cup holders of the time.
Edinburgh Hibernian football club were a successful team that had been founded in 1875 by Canon Edward Hannan. The club was run wholly for the Catholic Irish of the capital city and during its early years only practising Catholics were allowed to play for the club. Edinburgh Hibernian raised significant funds for the local community, and this was the primary inspiration for Brother Walfrid who led discussions with leading parish members in the summer of 1887, to establish a Glasgow Irish football team.
Brother Walfrid had a lot of contacts with powerful and influential people within the Irish Catholic community in Glasgow. Tom Maley, who worked closely with Brother Walfrid at the time and became a Celtic player and Committee Member, later ascribed the formation of the club to Brother Walfrid’s ‘…organising genius and wonderful persuasive powers’.
On Sunday, 6th November, a meeting was held that led to the official creation of Celtic FC. The club came into existence with a main objective of providing funds for the St Vincent De Paul Society to support the Dinner Tables for needy children in the local parishes. Brother Walfrid wrote the constitution and chose the name of Celtic in preference to the proposed name of Glasgow Hibernians. Unlike Edinburgh Hibernian, Celtic players did not have to be Catholic and tee-total.

The newly formed club was a great success from the off, reaching the Scottish Cup Final in its first season, and donating over £400 to charity in their inaugural year. By their fourth season Celtic had won the Scottish Cup, beating Queens Park in the final in front of a record 40,000 attendance.
Brother Walfrid had little time to revel in the success of his initiative as he was moved by the Marist Order from Glasgow to head up a school in the Whitechapel area of London’s East End. Whitechapel was a very deprived area of London home to large Jewish and Irish communities, and synonymous with the Jack the Ripper murders of a few years previous.
Despite his advancing years Brother Walfrid approached this new challenge with all of the enthusiasm and dedication he had displayed in Glasgow. As well as fulfilling the role of Headmaster at St Anne’s school in Whitechapel, Brother Walfrid established local boys’ clubs and a project to provide meals to the poor in the local community.
Walfrid’s last major challenge as a Marist Brother was to oversee the relocation of the novitiate school from Beaucamps in France to Sturry in Kent, England.
In May 1911, Brother Walfrid travelled to London from his base in Kent to meet some old friends from his time in Glasgow. Celtic were just returning from a European tour having recently won their sixth successive Scottish League title. Brother Walfrid was a guest of honour at the celebratory dinner.
Walfrid’s last few years were spent at the Marist Order’s home in Dumfries.
He died in April, 1915, and he is buried in the Mount St. Michael Cemetery in the town.