When Adlai Stevenson, the former governor of Illinois and a two-time presidential hopeful, asked an ageing Churchill where he had learned his extraordinary oratorical style, Churchill replied, “It was an American statesman who inspired me and taught me how to use every note of the human voice like an organ. He was my model”.
Churchill continued, “I learned from him how to hold thousands in thrall.” 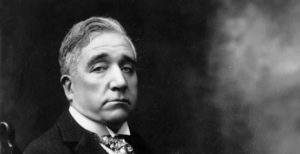 But who was this mentor and chief role model that helped to make Winston Churchill such a wartime success as an orator? This New York Senator turned out to be a Sligo man named William Bourke Cockran, who was born in Ballysodare near Ballinacarrow, in 1854.

Bourke Cockran received a classical education in Ireland at St. Jarath’s College, Galway, and in France at the Institut Des Petits Freres de Marie in Lille. It is reported that he could repeat lengthy passages from Virgil and Horace in the original, which was not only beneficial for his classical education but also in developing his extraordinary memory. He had, according to his biographer, Ambrose Kennedy, a logical mind, and was the master of accurate and clear speech.

Bourke Cockran was a patrician by nature and followed in the great oratorical tradition of Daniel O’Connell, Feargus O’Connor, and many of the Irish Party at Westminster. Indeed, had Irish barristers been paid a little better, he might very well have ended up at the Irish Bar, and possibly as a parliamentarian at Westminster. He was, like many of them, articulate, educated, confident in himself, and steeped in the classics. His success in New York is well known.