The Just William Books – Adventures of a Lovable Rogue!

The ‘Just William’ series is a sequence of thirty-nine books written by English author Richmal Crompton. The books chronicle the adventures of the unruly
schoolboy William Brown, writes JOE MORELLI

I was first introduced to the William books at the age of eleven by way of a birthday gift from my older sister; if she had first read the book she might have had second thoughts and chosen something potentially less lethal! 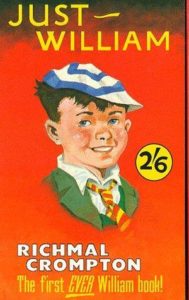 From the first page I was convinced I also could become a rebel just like William and right the wrongs of the world. My previous readings were the adventures of the Famous Five, every one so polite and proper, they never got dirty and they all went to boarding schools.

William, on the other hand, was the complete opposite. He hated school, was always scruffy and loved nothing better than playing Lions and Tigers. We were both aged eleven, but sadly I remained eleven for only one year, unlike William who was blessed by the gods to remain eleven throughout all of the 38 books written about his exploits.

First published in 1922 by Richmal Crompton, the books have never gone out of print and have sold over 17 million copies. I look on William as the modern day Bart Simpson; he would play in the nearby woods and instantly they would be transformed into a jungle with rivers and mountains filled with wild animals and Indians.

He and friends would entertain themselves for hours on end with homemade bows and arrows and headdresses made of chicken feathers. But if William had to be accused of having an Achilles heel then in truth it must be for the fairer sex.

A damsel in distress would do it every time, especially if she happened to be good looking with tears in her eyes, that would be more than enough reason for William to risk life and limb to champion her cause.

Continue reading in this week’s Ireland’s Own (issue 5587)