The Kilkenny Man who Survived the Sinking of the Titanic

MaryAnn Vaughan tells the story of Kilkenny’s Cecil William Fitzpatrick, who believed he survived the sinking of the Titanic because he had been born with the amniotic sac still on him. He kept this piece of tissue which later ended up in the hands of a World War II soldier, who also claimed it saved his life.

It was April of 1912 when the great Titanic was launched and sank on its first and only voyage across the Atlantic.
Famously dubbed “the ship that could never sink”, it was to bring 2,224 passengers and crew to New York City.
It was built in Belfast in the shipyard at Harland and Wolff, and on the 1st of April it sailed to Southampton to pick up passengers there.

It departed Southampton on the 10th of April and made its way first to Cherbourg, in France, and then to Cobh, in Cork, which it left on the 11th.

As we all know, tragedy strikes just three nights later, on the 14th of April, when the Titanic hits an iceberg in the middle of the Atlantic – roughly 600 kilometres south of Newfoundland. The collision happens at about 11.40pm and within a few hours the Titanic has sunk, taking with it more than 1,500 lives.
So many stories have been told about this ship and those who were on it, that it is a rare thing to come across an untold tale. And yet, the story of a Kilkenny-native on board provides us with a truly fascinating narrative, never told in full until recently.

Cecil William ‘Liam’ Fitzpatrick was born on William Street in Kilkenny City on the 26th of April, 1890 to RIC officer, Robert Fitzpatrick (who was originally from Cavan) and music teacher, Mary Ryan, or Mary Gertrude as she sometimes went by. 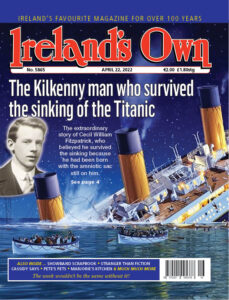 Importantly to this story, family lore states that Liam was born still inside the intact amniotic sac, which is referred to as en caul. This is significant because the old wives’ tale that goes along with this kind of birth is that this person can never be drowned.

In fact, mothers would often save this caul as a good luck charm, or they would sell it to sailors for a nice price; sailors also believing that this would keep them safe at sea.

Liam had three siblings – one older and two younger – and by the 1901 census the family were no longer living in Kilkenny but had been moved to Kerry where his father, Robert, had been restationed.
Ten years later, in the 1911 census, his parents are living in Galway and there’s no sign of Liam, who’s now 21 and working at sea.

In 1912, Liam manages to get himself a job on board the Titanic in the engineers’ department as a steward and he was reportedly hugely excited at the opportunity to sail on such a prestigious vessel. He is just a couple of weeks shy of 22 at the time and eager to prove himself.

Remarkably, Liam manages to survive the sinking of the Titanic and is interviewed shortly afterwards by a journalist working for a paper called The Western Daily Mercury.

Continue reading in this issue no. 5865